Home » World News » After some personal touches, the Queen is finally home

After some personal touches, the Queen is finally home 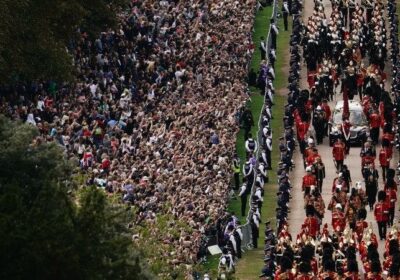 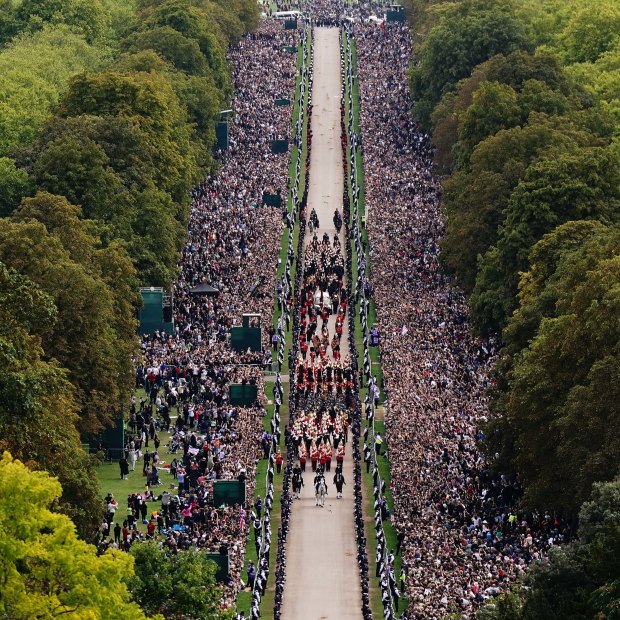 Crowds at Windsor watch as the Queen’s hearse appraoches the castle. Credit:Getty Images

Windsor: At the oldest and largest occupied castle in the world – home to more than 900 years of royal history – Sandy and Muick, the late Queen’s beloved corgis, waited on the steps with their tongues and tails wagging.

Emma the fell pony was there, too – perhaps even anxiously awaiting her rider’s final return amid the sound of the drums, trumpets and cannon fire. She must have wondered what all the fuss was about. 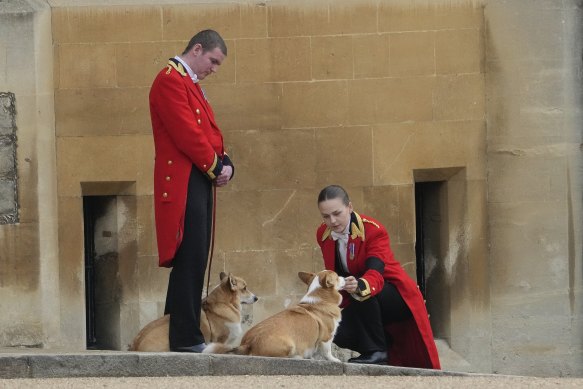 The Queen’s two remaining corgis, Sandy and Muick, wait for the coffin to arrive. Credit:AP 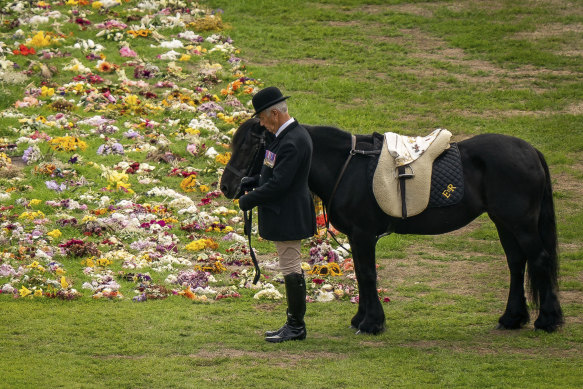 Emma, the Queen’s pony, stands as the procession passes by.Credit:PA

After months in Scotland and 10 days on her final journey, the Queen was finally among her cows, dogs and horses, the river and its swans, the parks and its gardens and flowerbeds. If a mandated period of national morning, a public holiday and two services organised by bureaucrats and diplomats could produce a personal touch, then this was it.

On a remarkable day, it was St George’s Chapel where Elizabeth II’s committal service took place; the scene of some of the most symbolic moments of Monday’s ceremonies.

An estimated 100,000 people lined the streets of the historic town but as the Queen’s hearse passed along the Long Walk, her coffin draped in the Royal Standard, the crowd fell silent.

Many bowed their heads, others held phone cameras aloft to capture the sombre moment, before breaking into spontaneous applause as the cortege passed them by and made its way into the castle courtyard. 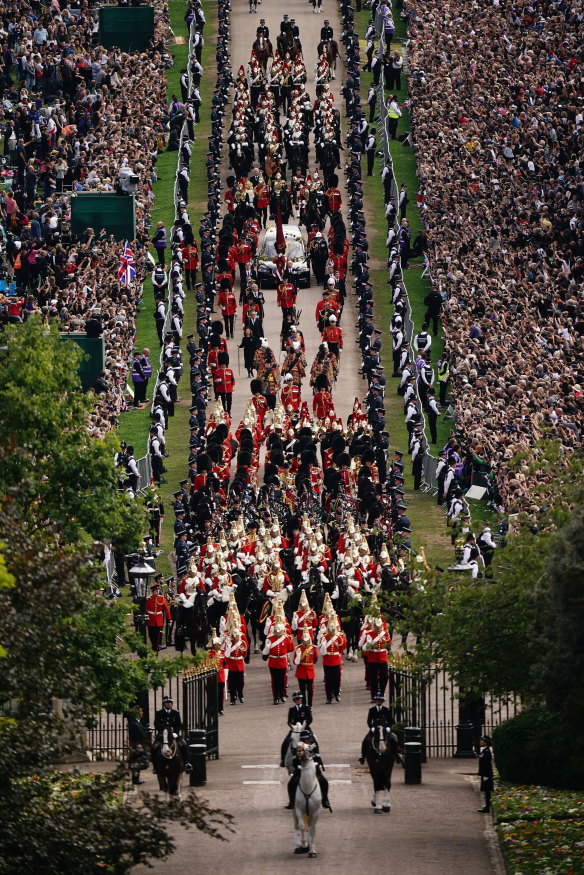 A huge crowd descended on Windsor to say goodbye.Credit:PA

The late Queen had agreed to most elements of the service. Several of the organ pieces were arranged by William Henry Harris, organist at the Chapel Royal between 1933 and 1961 who inspired the young Princess Elizabeth’s interest in music. Harris also wrote the motet Bring Us, O Lord God, which was sung as part of the service.

Her preferences were reflected by chaplains from three of her favourite residences. 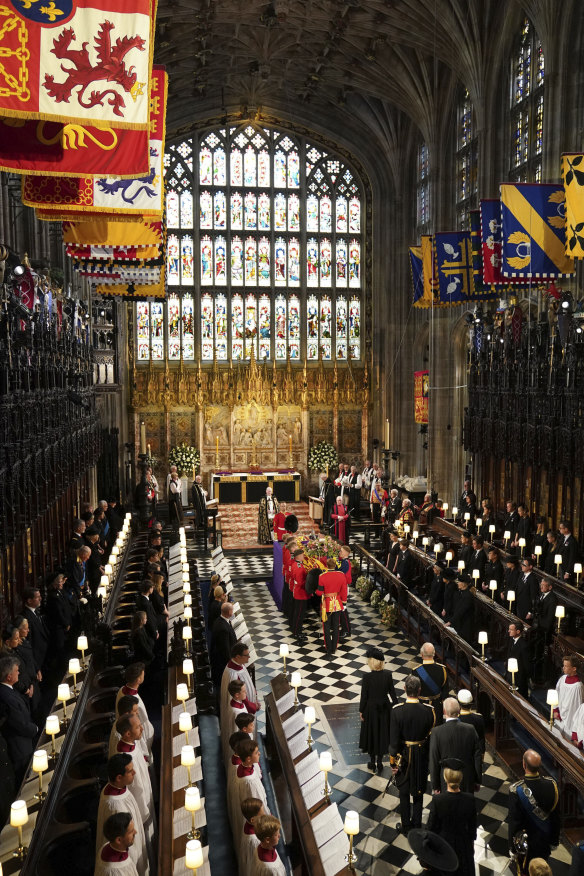 The Queen’s coffin arrives for the committal service, followed by senior members of the royal family. Credit:PA

The rector of Sandringham, the late Queen’s residence in Norfolk, the minister of Crathie Kirk, the church near her Balmoral estate, and the chaplain of the Royal Chapel in Windsor Great Park led prayers during the ceremony.

But perhaps most importantly, this was where she would spend the rest of eternity, alongside those treasured loved ones who had ridden on ahead.

In an intimate family event in a small side chapel set apart from the main royal vault, King Charles III scattered earth upon his mother’s coffin, as the late Queen did for her father. Not only will Prince Philip’s body be moved to be with his wife’s, but she rests alongside her father, mother and sister Princess Margaret in the King George VI Memorial Chapel.

The ceremonial heart of the committal service came when the Queen’s Bargemaster and a Serjeant at Arms removed the instruments of state – the crown, orb and sceptre used in the coronation – from the top of the coffin. It represented the completion of a circle started when George VI died and the instruments were removed from his coffin and subsequently presented to the late Queen at her coronation in 1953. 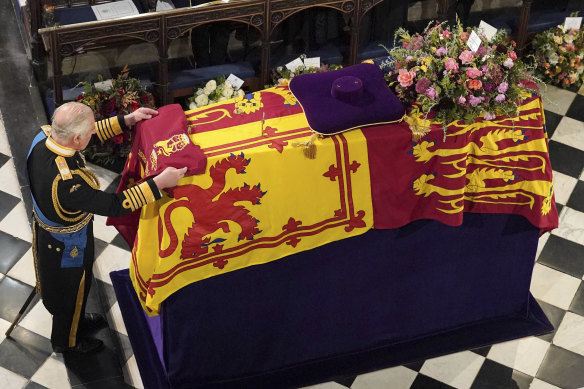 King Charles III places the Queen’s Company Camp Colour of the Grenadier Guards on the coffin.Credit:PA 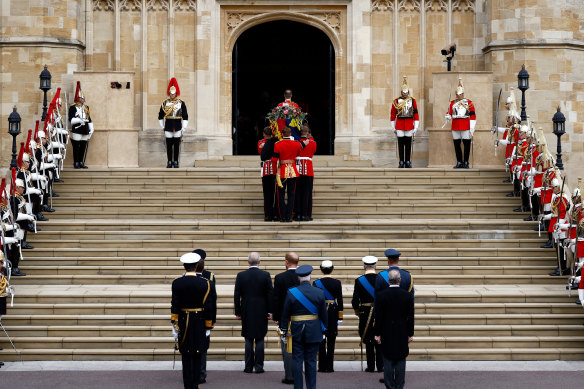 The coffin is carried into St George’s Chapel.Credit:Getty 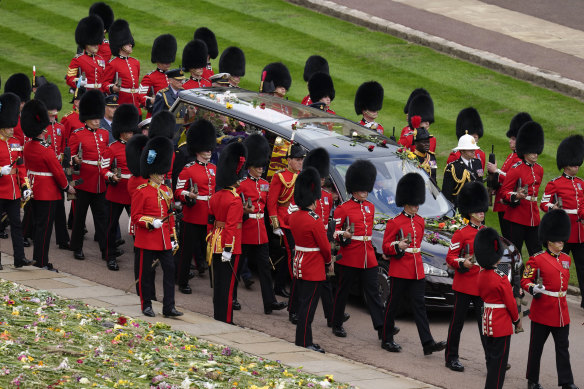 Although Westminster Abbey was for centuries the usual burial place for kings and queens, more sovereigns over the past 300 years have been interred in the chapel at Windsor.

The Queen will be the first female sovereign to have her final resting place in St George’s Chapel. Ten of the country’s kings and seven of their queen consorts are buried there, with 28 princes, princesses, dukes and duchesses.

Harry, the Duke of Sussex, married Meghan, the Duchess of Sussex, here in 2018. Prince Philip’s funeral at which the Queen sat alone due to COVID-19 restrictions unfolded here last year. So too an annual service during which 24 knights of the garter process with the monarch in their velvet robes and plumed hats.

But this wasn’t just about the past but about the future. Princess Charlotte sat between the Duke of Sussex and her mother, Catherine, Princess of Wales, on the front bench on one side of the chapel. Prince William, Prince of Wales sat on the end of the row next to his son Prince George.

“In the midst of our rapidly changing and frequently troubled world, her calm and dignified presence has given us confidence to face the future, as she did, with courage and with hope,” the Dean of Windsor, David Connor, eulogised.

“We pray that God will give us grace to honour her memory by following her example, and that, with our sister Elizabeth, at the last, we shall know the joys of life eternal.”

And with that – and a lone piper – the coffin was lowered beneath the chapel and she was at peace. And finally home. 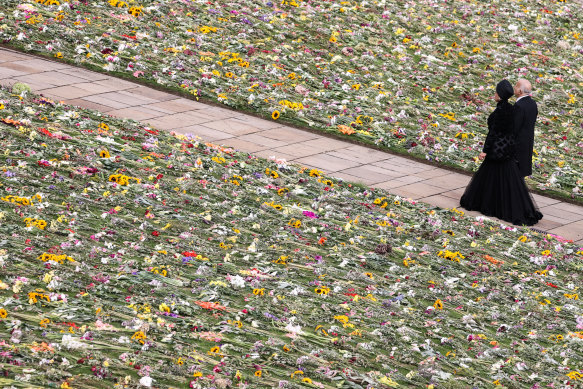 Mourners walk through a sea of flowers following the committal service.Credit:Getty

Receive a wrap of our coverage as the world mourns Queen Elizabeth II in our Morning Edition newsletter. Sign up here.