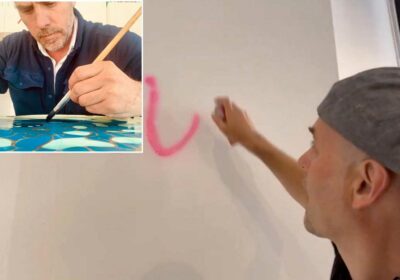 Art interrupter Rod Webber, who was busted for vandalizing the Soho gallery hawking Hunter Biden’s paintings, said Saturday that he wanted to protest President Biden’s “war crimes” — but had no beef with the artwork itself.

“I don’t hate it. It’s better than he should be for having only been working on it for a short period of time,” Webber said of the younger Biden’s work which is scheduled to be sold this fall by the Georges Berges Gallery.

The work itself is not on display in Soho, but images of it have been widely circulated.

Webber is accused of arriving at the West Broadway gallery around 4 p.m. Friday and spray painting Daddy backwards on the wall.

He told a police officer “I was trying to paint the phrase, ‘Daddy is a war criminal,’ ” a prosecutor said Saturday at Webber’s arraignment in Manhattan criminal court.

He was charged with assault, criminal mischief, attempted assault, making graffiti, and possession of graffiti instruments.

Webber, who famously ate a banana off the wall of an installation at Art Basel in Miami in 2019, was released without bail. He was barred from returning to the gallery at 462 West Broadway

At the end of the court proceeding, he pulled his mask down, puckered his lips and gave a thumbs up to the judge.

He later told The Post he was following the news about Biden’s paintings, which are expected to be offered for up to $500,000 despite having the artist having no track record.

“While Hunter Biden and his artwork is, you know, it’s not bad, it’s curious to me that it’s raising prices of half a million dollars just out of the blue. It says to me that there’s some kind of malfeasance there,” Webber said

He took issue with the gallery staffer who tried to detain him after the incident by “with his big ass girthy body was on top of me.”

“I said ‘Listen man, you’re out of shape. I could take you right now, but I came here peacefully, will you just please let me go?’ ” he said.

Says he may file civil suit against the man who “attacked” him:

“I didn’t assault the guy, he assaulted me.”