Cardinal George Pell has linked the charges he faced in Australia to his efforts to clean up the Vatican’s finances, claiming senior Catholic Church figures targeted him as he probed corruption allegations at the highest levels of the church.

Cardinal Pell was cleared of child sexual abuse charges earlier this year and told Italian current affairs program Sette Storie on Tuesday that everyone who had tried to clean up the Vatican's finances had faced public attacks. 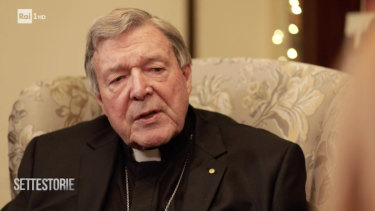 "Every single one, with very few exceptions, has been publicly attacked in one way or another," Cardinal Pell told RAI 1’s Monica Maggioni.

"Let’s not forget what happened to (Roberto) Calvi who committed suicide."

Cadinal Pell made the claim that the death of Mr Calvi, a former Vatican banker, was instead the result of foul play.

Cardinal Pell also alleged others had been targeted. He said Danny Casey, the Sydney Diocese former business manager, had his car set on fire, which the Cardinal claimed was connected to Mr Casey's efforts to clean up finances.

"Everyone believes there is a connection (between the corruption probe) and what happened in Australia, everyone I work with has no doubt either," he said.

"We have criminals who have been heard to say ‘Pell is out of the game now and we’ve got a clear highway ahead now’.

"It’s for this reason that I hope that there will never be enough evidence to prove that Vatican money was used if not to corrupt directly, at least to poison the public atmosphere against me. I hope there is no proof of this for the good of the church.

"We have some evidence but no proof yet but certainly there is a lot of smoke." 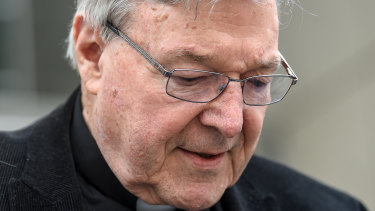 The Cardinal was the Vatican’s finance minister until he returned to Australia to face sexual abuse allegations.

He left his job as prefect of the Vatican's economic ministry in 2017 to face charges that he sexually molested two 13-year-old choir boys in the sacristy of St Patrick’s Cathedral in Melbourne in 1996.

After the first jury deadlocked, a second unanimously convicted him and he was sentenced to six years in prison. The conviction was upheld on appeal only to be thrown out by the High Court, which in April found there was reasonable doubt in the testimony of his accusers.

The Cardinal went on to criticise the decision of Victoria’s Court of Appeal as well, which upheld the original County Court conviction.

"The gigantic mistake was made by the two judges of the majority of the court of appeal," Cardinal Pell told RAI 1.

"I could understand that public opinion was against me while I could not understand why two expert judges could reach those conclusions."