Home » World News » A girl went missing in 1983. A search for her has found two empty tombs and more mystery

A girl went missing in 1983. A search for her has found two empty tombs and more mystery Rome: Thirty-six years ago, the teenage daughter of a Vatican City employee vanished off a Rome street on her way home, beginning one of Italy's most enduring mysteries. Over the years, reports have variously linked her fate to the Sicilian Mafia, the KGB and the plot to assassinate Pope John Paul II.

On Thursday, the latest trail led her family and a Vatican-appointed forensic scientist to two tombs inside the Vatican walls, the burial places of princesses well over a century dead. 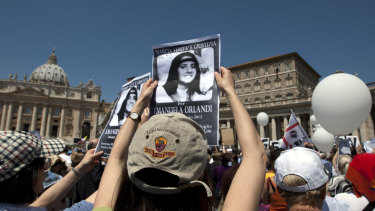 The team only found another mystery: the tombs were empty. Even the bodies of the dead princesses were missing.

It was yet another strange turn for a family that has suffered false leads, red herrings and intense media attention since the girl, Emanuela Orlandi, disappeared at age 15 on June 22, 1983. Their quest to discover her fate has taken them down many tortuous paths, following up on tips, anonymous letters and reports of sightings.

Like other well-scrutinised cold cases around the world, Emanuela's disappearance has inspired many conspiracy theories. She has been linked to the CIA, to Bulgarian agents, to a Roman crime gang and to a US archbishop involved in a major Italian banking scandal. 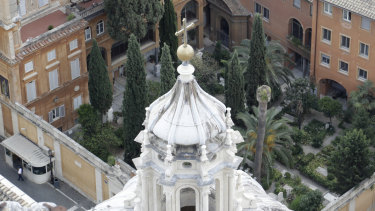 The Teutonic Cemetery inside the Vatican where a pair of tombs opened in the search for Emanuela Orlandi uncovered another mystery.Credit:AP

But clues in the case have been scanty, despite investigators' efforts. This was not the first exhumation in search of her remains.

The path to the tombs began in late 2017, when Emanuela's brother, Pietro Orlandi, was approached by the first of several people working inside the Vatican who suggested that Emanuela might be buried in the Teutonic Cemetery, which for centuries was a final resting place for people of Germanic origin.

His sources told him to seek the place where an angel was pointing in the cemetery, which is between St Peter's Basilica and the Paul VI Audience Hall.

That led Orlandi to the tomb of Princess Sophie of Hohenlohe, who died in 1836. Giovanni Arcudi, a professor of forensic medicine at the University of Rome Tor Vergata, began the exhumation of the tomb on Thursday. 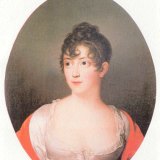 Danish Princess Carlotta Frederica of Mecklenburg was buried in 1840 in Rome, but her tomb turned out to be empty. Credit:Wikimedia/Commons

Arcudi was authorised by the Vatican's chief prosecutor to analyse the contents of the tomb — as well as the adjacent tomb of Princess Carlotta Frederica of Mecklenburg, who died in 1840 — and take samples for DNA testing. The theory was that Emanuela's body was inside one of the tombs.

Through the family's lawyer, Laura Sgro, in February, Orlandi formally asked the Vatican to open the tomb of Princess Sophie. The family received approval last month to have open both tombs opened.

But any hope that the tombs would provide answers to the family were quickly dashed when the Vatican issued a statement hours after the operation began.

"There were no human remains nor funerary urns," Vatican spokesman Alessandro Gisotti said in the statement. 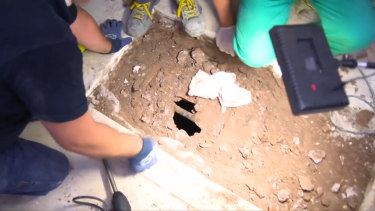 Experts opened two graves at the Teutonic Cemetery in the Vatican in search of clues to the disappearance of Emanuela Orlandi and found no human remains, not even of the princesses meant to be buried in them.Credit:Screengrab/Reuters

Princess Sophie's tomb led to a large underground space that was "completely empty," the statement said, while the tomb of Princess Carlotta "had no human remains."

The Vatican added that the cemetery had undergone work during the first part of the 19th century and again in the 1960s and 1970s and that it would examine the documentation regarding these interventions. 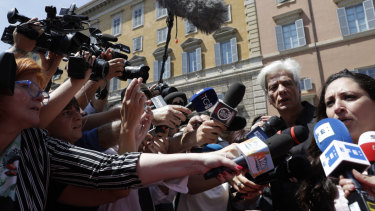 Pietro Orlandi, brother of Emanuela Orlandi who when missing in 1983, second from right, stands by his Laura Sgro as she speaks to the media after the Vatican reopened two tombs in the Teutonic Cemetery .Credit:AP

On Thursday, Sgro said the family was trying to understand why they had been sent on yet another fruitless search.

"We expected everything today but not to find two empty tombs," she said on the Italian affiliate of Sky News. "We want to know why we were sent there and why there was nothing."

After the tombs were found empty, Orlandi, Emanuela's brother and the leader of the family's decades-long efforts, told the Italian affiliate of Sky News, "Part of me was relieved that Emanuela was not there." 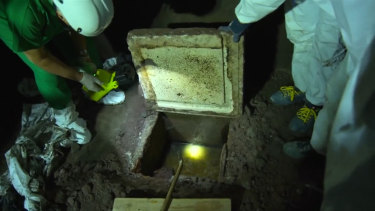 The two graves date back to the 1840s but their occupants are missing.Credit:Screengrab/Reuters

He added in a separate interview Thursday that his family had become used to "illusions and disillusions" and that they had known that the exhumation could have been a further waste of time. "Still," he said, "I was surprised that there was nothing at all."

Orlandi said he had called on the Vatican to investigate after receiving several tips from people working in the Vatican, although none of them were there at the time of his sister's disappearance.

He said that he had been "positively surprised" by the Vatican's assistance. "For the first time in 36 years, the Vatican has concretely done something important" in the case, he said.

Opening the tomb "signals a change of position," he said, noting that when he met Pope Francis in 2013, the pope told him that his sister was "in heaven" and left it at that.

Orlandi said the Vatican's overture had been important because after decades of denying any links with the case, there was "an admission that there is a possibility of internal responsibility."

But he said the missing princesses posed a new dilemma for the Vatican. "Now, even the heirs don't know where they've gone," he said. "I think this is a problem for the Vatican that will have to be justified."