Hundreds of mourners have gathered at Charlise Mutten’s primary school to pay tribute to the nine-year-old who was allegedly murdered by her mother’s fiance in the NSW Blue Mountains last week.

Students, teachers and strangers touched by the tragedy attended the candlelight vigil held at Tweed Heads Public School, on the NSW North Coast near the Queensland border, on Wednesday night. 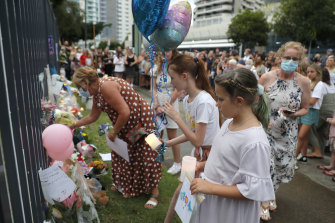 The mourners left flowers, candles and handwritten tributes to the young student who was described as a beautiful and much-loved little girl who loved butterflies.

“Her bright smiling face and her beautiful nature shone as bright as her spirit is now,” a friend told the vigil.

“Some of us knew Charlise well, and some of us are here tonight to simply acknowledge she existed and are deeply shocked and saddened by what has happened.

“To share our deep grief with each other and show, as a community, that she mattered.

“Charlise has touched many lives on her journey throughout this world, especially within the school community.”

Charlise’s teacher told the vigil she was loved by everyone at the school. “Her enthusiasm, positivity and warm, genuine and bubbly personality made our school a much better place,” she said.

The primary school student’s step-father, Justin Stein, 31, appeared at court on Wednesday charged with murder after she was reported missing on Friday.

Deputy Commissioner Dave Hudson said police used a combination of CCTV footage and GPS tracking to follow the movements of the accused. 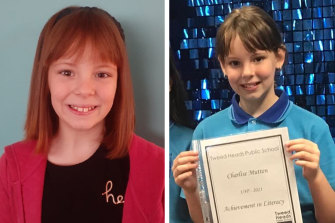 Charlise Mutten was allegedly murdered by her mother’s fiance.

Police say that following an alleged failed attempt by Mr Stein to launch a boat in Sydney, they tracked him from the dock to the Colo River, where Charlise’s remains were found inside a barrel on Tuesday evening.

She was on holiday at Mr Stein’s remote family property, Wildenstein, in Mount Wilson. She was visiting from Queensland, where she lived with her grandmother.

Tweed MP Geoff Provest said her death had affected the whole town, praising the strength of her young schoolmates who attended the tribute.

“It’s really put a dagger through the heart of the local community,” he told 2GB.

“The strength of those young students is second to none … it’s about celebrating her life, to remember the positivity of what that young lady contributed in her terribly short life.

“In the future when I ever see a butterfly, I’ll probably have a flashback to this poor little girl that tragically lost her life.”