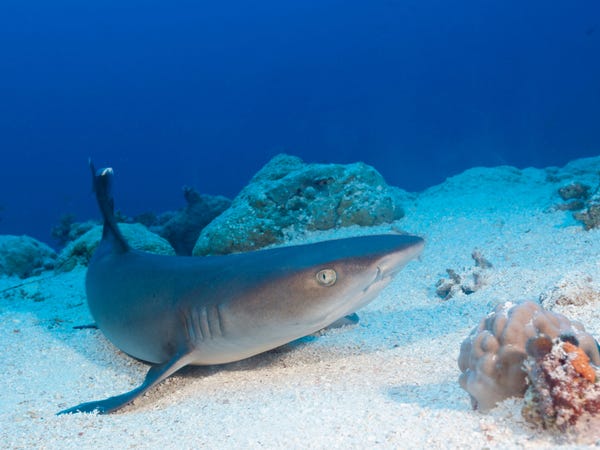 A 12-year-old boy from Ukraine lost his arm and an Egyptian tourist lost a leg in a rare shark attack while snorkeling in the Red Sea, Egypt's Environment Ministry said in a statement.

The boy had been snorkeling with his mother, their tour guide, and four others on Sunday in the Red Sea, off the coast of Ras Muhammad National Park near the resort town Sharm el-Sheikh, Egypt, when the shark attacked, officials said.

A social media video seen by the Environment Ministry showed a two-meter-long (six-foot-long) oceanic whitetip shark acting "hostile" toward humans near the area of the attack, and the officials said it was "likely" that the shark  "was the fish that attacked the injured."

The ministry did not release any information on the status of anyone injured, but said an undisclosed number of people had been taken to the hospital.

Ukraine's State Agency for the Development of Tourism said on Monday that the 12-year-old boy had lost his arm in the attack, and is recovering in an intensive care unit.

A health official told the Associated Press that the tour guide lost a leg in the attack and the boy's mother experienced minor injuries.

The area of Ras Mohammed National Park where the shark attack happened was closed after the incident.

Shark attacks are rare in the Red Sea, but in 2010 a number of attacks believed to be carried out by a whitetip shark led to several injuries and the death of a tourist.