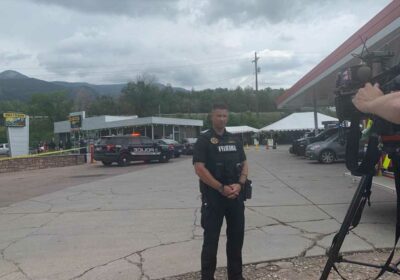 A 4-year-old boy fatally shot himself with a gun he found in his family’s car in front of his mother and younger sibling — as his father went into a Colorado marijuana dispensary, authorities said.

The child, whose identity was not immediately released, was pronounced dead Tuesday after a self-inflicted gunshot wound to the head outside a pot shop in Manitou Springs, according to the El Paso County Sheriff’s Office.

Investigators determined the boy’s mother, Ashlynne Perez, 25, was inside a car along with his younger sibling as their father, Carlos Perez, 26, went inside to make purchases at the dispensary.

“This is a tragic investigation that not only affects the family of the victim, but it affects our community and first responders,” sheriff officials said. “We want to remind the community to be sure to talk to your children about guns, even if you do not own guns.”

The incident occurred outside of a marijuana dispensary called Maggie’s Farm, the Colorado Springs Gazette reported.

The shop was closed Tuesday and Wednesday following the shooting, according to a statement on its website.

“We express our deepest condolences to the family experiencing a tragic loss,” the statement read. “Though the events are not connected to our business, we will continue to be a resource for the El Paso County Sheriff Department’s investigation.”

Deputies said Ashlynne and Carlos Perez were charged with criminally negligent child abuse resulting in death. It’s unclear if they’ve hired an attorney who could speak on their behalf.

“If you own guns, gun safety must be taught to all those that are near the gun, the gun must be stored unloaded and locked up,” sheriff officials said. “All keys to the locks should be hidden.”