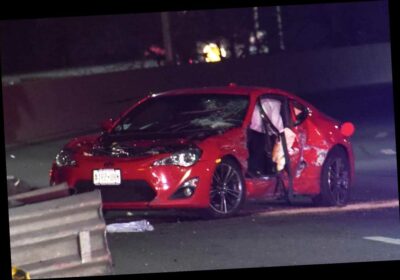 MTA bus smashed up after removal from Bronx overpass

A front-seat passenger was killed early Friday when a motorist — suspected of drunk driving — crashed on the Brooklyn-Queens Expressway, cops said.

The unidentified 23-year-old man was inside a red two-door Scion around 12:40 a.m. when the driver, a 22-year-old woman, lost control as she headed east on the expressway, approaching Flushing Avenue, authorities said.

The car slammed into a stationary “cushion” structure at the exit — hurling the passenger onto the roadway, cops said.

He was rushed to Bellevue Hospital, where he was pronounced dead.

The driver, who is in custody on suspicion of drunk driving, is at Woodhull Medical Center in stable condition — as is a back-seat passenger, a 33-year-old man, police said.

Charges are pending against the motorist. No other vehicles were involved in the crash.