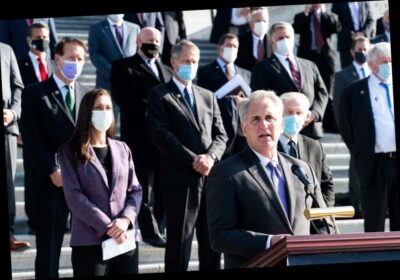 At least 140 Republicans in Congress are expected to support President Trump’s bid to overturn the results of the Electoral College next week.

The Jan. 6 vote is likely to fail and divide Republicans as President-elect Joe Biden prepares to take office Jan. 20.

Biden won the Electoral College by 306-232, but Trump argues that fraud tipped the results in swing states. Courts have rejected that claim.

Sen, Josh Hawley (R-Mo.) said Wednesday he would join with a group of House Republicans objecting to the results, ensuring there is a vote on whether to accept the Electoral College outcome.

A member of both the House and Senate must object to trigger actual floor votes on whether to accept the outcome.

But once the objections are made, the House and Senate hold separate votes. Both chambers must accept an objection. Because Democrats will control the House, it’s unlikely that it will prevail in the lower chamber.

Senate Majority Leader Mitch McConnell (R-Ky.) strongly discouraged colleagues from objecting, saying it would be a “terrible” vote for Republicans because some would oppose Trump. Senate Majority Whip John Thune (R-SD) told reporters a challenge would “go down like a shot dog.“

Pennsylvania Republican Sen. Pat Toomey (R-Pa.) has indicated he won’t support an objection. His state is one of a handful that narrowly broke for Biden.

In a statement this week, Hawley noted that Democrats objected to the results of the 2004 and 2016 elections, though both efforts failed.

“I cannot vote to certify the electoral college results on January 6 without raising the fact that some states, particularly Pennsylvania, failed to follow their own state election laws,” Hawley said.

“And I cannot vote to certify without pointing out the unprecedented effort of mega corporations, including Facebook and Twitter, to interfere in this election, in support of Joe Biden. At the very least, Congress should investigate allegations of voter fraud and adopt measures to secure the integrity of our elections.”