A 12-year-old boy in Colorado got a five-day suspension for flashing a toy gun across his computer screen during an online art class, according to a report.

The El Paso County Sheriff’s Office said although the teacher thought it was a toy gun authorities still did a welfare check on Isaiah Elliott without parental notification.

“It was really frightening and upsetting for me as a parent, especially as the parent of an African-American young man, especially given what’s going on in our country right now,” Curtis Elliott, Isaiah’s father, told KDVR.

He said his son, who has been diagnosed with attention deficit hyperactivity disorder (ADHD) and has learning disabilities, wasn’t aware the gun was shown on screen in his distance learning.

“He was in tears when the cops came. He was just in tears. He was scared. We all were scared. I literally was scared for his life,” said Curtis Elliott.

“The virtual setting is not the same as the school setting,” the dad added. “He did not take the toy gun to school. He’s in the comfort of his own home. It’s a toy.”

The toy gun was neon green and black with an orange tip featuring the words on the handle: “Zombie Hunter.” 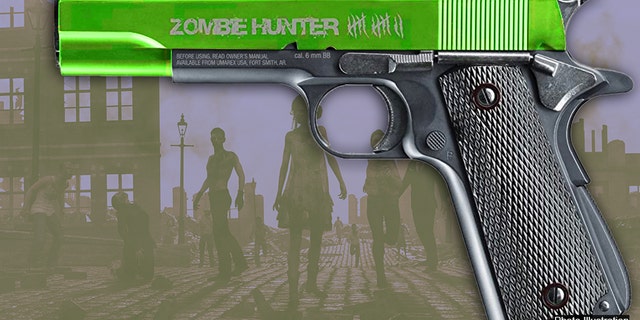 The toy gun was neon green and black with an orange tip featuring the words on the handle: “Zombie Hunter.” (Photo illustration)

Reports said the school district, the Widefield District #3, refused to give the Elliott family the recording of the online class, but authorities showed the family a video of the class from a recording from a police body camera.

The boy’s mother said the punishment didn’t fit the crime.

“For them to go as extreme as suspending him for five days, sending the police out, having the police threaten to press charges against him because they want to compare the virtual environment to the actual in-school environment is insane,” said Dani Elliott.

She said she wishes the teacher had reasoned with the parents before condemning the boy.

“If her main concern was his safety, a two-minute phone call to me or my husband could easily have alleviated this whole situation to where I told them it was fake,” said Dani Elliott.

The school won’t apologize for its discipline.

The Grand Mountain school said in a statement: “We follow all school board policies whether we are in-person learning or distance learning. We take the safety of all our students and staff very seriously. Safety is always our number one priority.”

CORONAVIRUS: WHAT YOU NEED TO KNOW

The parents are looking to enroll their son in a charter or private school.

“I definitely feel they crossed the line,” said the mom. “They were extreme with their punishment, especially sending the police out and traumatizing my son and my family.”