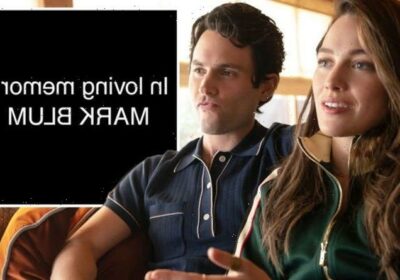 You season three premiered on Netflix with a bang on Friday, October 15 as fans finally got to see how Joe Goldberg (played by Penn Badgley) and Love Quinn’s (Victoria Pedretti) twisted romance continued. And the premiere delivered on the drama’s typical blend of suspicious goings-on, dark humour, and, of course, brutal murders. However, it’s a title card that popped up before the credits rolled in the season three opener which has sparked a fan reaction as bosses paid tribute to former star, Mark Blum.

Sadly Blum died at the age of 69 last year following a battle with coronavirus.

The You star appeared through Joe’s flashbacks during the first two seasons of the Netflix series, as fans got to see how the strict Mr Mooney impacted Joe growing up.

Speaking of Blum’s death and how it impacted season three, executive producer Sara Gamble said: “Mark Blum was an extremely talented actor and such a pleasure to work with. We were just devastated.

“This is the first time I’ve ever experienced having to rewrite a storyline because something so tragic has happened,” she added to TV Line.

Blum portrayed Mr Mooney in only four episodes across the first two seasons but it was clear to see how much the character helped mould Joe into the twisted character he is today.

To pay tribute to the star, You season three, episode one ended with a title card which read: “In loving memory Mark Blum.”

And inevitably, it didn’t take long for You viewers to react to the touching nod to Blum, with some even reduced to tears.

Twitter user @jazminevillega9 penned: “Sooooo Mr. Ivan Mooney that was played in the first season of ‘YOU’ ‘Mark Blum’ was from Newark NJ, where i was born and raise, he also died on my birthday  March 25, 2020, yeah so sad. May Mark Blum Rest In Peace.”

DON’T MISS:
Paul Rankin blasts James Martin after he ‘loses it’
Lorraine Kelly left red-faced as daughter Rosie details ‘carnage’
Bradley Walsh opens up about The Larkins regret ‘What have I done?’

“Thank you so much! HB miss Mark Blum. [love heart emoji],” they added.

The first episode was packed full of twists and turns as You viewers got to see Love and Joe adapt to life in the suburbs.

However, the pair didn’t leave their sociopathic and obsessive behaviour behind as new father Joe soon became enamoured with neighbour Natalie (Michaela McManus).

After some flirty exchanges, Joe had his new obsession while Love struggled to adapt to motherhood with their son James.

Of course, Joe’s new adoration for the You newcomer didn’t go unnoticed by Love who discovered his new obsession and killed Natalie.

Over the course of season three, the husband and wife duo tried to cover up their part in Natalie’s death but, of course, it was far from plain sailing.

You seasons 1-3 are available to stream on Netflix now.