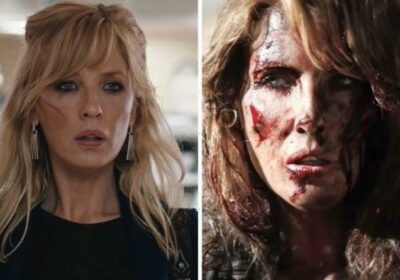 Paramount’s smash hit Western series returned over the weekend with a thrilling two-part premiere event on Sunday. Yellowstone is back and better than ever, but main cast member Kelly Reilly was convinced she wouldn’t be returning as Beth Dutton after the shocking events of the last instalment.

Beth’s fate was up in the air after an explosive package was delivered to her office in the season three finale.

Thankfully, fans’ favourite ice-cold banker survived for one more season, emerging from the building with severe burns and tattered clothes.

Most fans were concerned Beth may have been revealed to have died in the season opener.

Even Reilly herself was surprised by her character’s miraculous recovery, as she explained in a new behind-the-scenes video on the season premiere.

READ MORE: Alana and Jason Married At First Sight Australia: Are they together?

“We see that Beth survived something that she should not have survived,” she revealed.

Beth may have taken some time to recover from her injuries, but the attack seems to have been no worse than what fans have seen her suffer before.

Although she has been left with some considerable scars, the daughter of John Dutton (played by Kevin Costner) began the new season toughened and angrier than ever.

Reilly continued: “She walks out of that building burned from top to toe.

“And there’s some sort of omnipotent, power, life force that she comes out of that building with.”

The actress all but confirms Beth is invincible now two of the Duttons’ rivals have attempted to take her down.

The fifth season of Yellowstone has yet to be officially confirmed, but after surviving multiple attacks on her life Beth is almost guaranteed to return.

However, the start of season four has still not been plain sailing for the damaged Dutton.

John’s family, along with roughly eight million Yellowstone viewers, watched with bated breath to find out if the ranch owner would survive last year’s ambush.

The wealthy Dutton patriarch was gunned down by unknown assailants at the end of season three but thankfully managed to pull through after a long recovery.

Reilly said: “I think that’s probably the worst two months of her life.

“And that’s saying a lot because Beth’s been through so much.”

Despite their complicated relationship, Beth has already been integral to her father’s long road to recovery.

Both she and brother Kayce (Luke Grimes) were racked with grief as they expected the worse, but luckily John is made of sturdier stuff.

“But she thinks she’s going to lose him,” Reilly recalled.

“She finds out that he’s going to survive, [and] she becomes a sort of caretaker.

“She looks after him and she nurses him and there’s this sort of nurturing side to Beth. She needed to know he was going to be okay.”

With John out of action, it will be down to ruthless ranch manager Rip Wheeler (Cole Hauser) to take action and finally bring those responsible to justice.