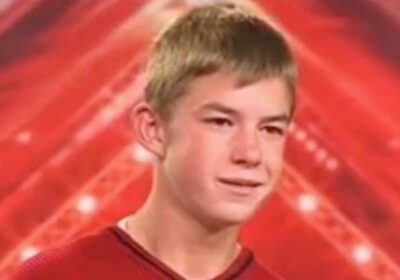 X Factor star Anthony Russell has completely transformed since his days singing on the ITV talent show – and it seems he has also grown out of his nickname ‘Tighto’.

Anthony first appeared on the programme aged just 17 as a fresh faced Liverpudlian singer in 2007, wowing the judges with his rendition of Frank Sinatra’s Somewhere Beyond the Sea.

He famously clapped back at Simon Cowell’s criticism by saying: “Nice one, Si.”

READ MORE: Samira Mighty reveals she was knocked back from X Factor at 15 years old

Anthony explained that his nickname came from when he was “dead tight with his sweets” at junior school, though he has thankfully now grown out of that.

He cheekily promised the judges at the time: “If I get famous everyone can all have my sweets. There’s nothing that can stop me now.”

Anthony was eliminated at the Boot Camp rounds the first time, but returned in 2017 until his problems with drug addiction meant he withdrew to complete a stint in rehab.

Just a year later, he was back, and finished in third place.

Anthony, however, has now opened up to the Echo about how his success on the show could have killed him, explaining that being forced to quit the X Factor tour when his issues with drink and drug addiction resurfaced eventually saved his life.

He told the publication: “I used that to get sober because the news came out about me and my family were devastated. If I did stay on the wagon and stay on the tour and came home with the full pay check, the way I was going, I could have been dead with the money I was getting.”

The star added: “If I never got caught and come off that with a clean sheet and the full pay packet, I knew what I was doing. I was going to go to my mates' bars and go shopping because that was the kind of ego and the addiction what fed me.” Now in recovery from his addiction, Anthony has returned to his day job of construction work to fun his music career, and hopes to release his debut album, By the River, later this year.

He also looks totally different, growing his brunette hair out into a longer shaggy style with a dusting of facial hair.

It’s a far cry from his early X Factor days, when Anthony usually sported a shorter ‘do and clean shaven look, before growing out his beard into designer stubble during his days under the mentorship of Louis Tomlinson.

Anthony added to the Echo that he’s developed into a “generous man” and doesn’t mind offering his sweets around to the other staff on construction sites.