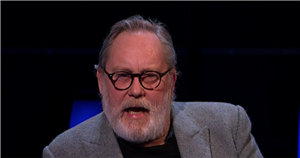 Who Want To Be A Millionaire? fans were left distracted after they discovered comedian Vic Reeves' real name during his stint on the ITV game show.

Vic, whose real name is Jim Moir, had some fans scratching their heads as they appeared confused with who was sitting in the quizzing hot seat opposite presenter Jeremey Clarkson.

Taking to Twitter, bewildered viewers shared their thoughts on the player.

One fan wrote: "I was today years old when I realised Vic Reeves is a stage name. His real name is Jim Moir!"

Another said: "I was wondering who Jim Moir was when reading the programme description. Turns out it’s Vic Reeves."

A third added: "Just had to Google @vicreeves as he is on #WhoWantsToBeAMillionaire [email protected] is calling him 'Jim Moir'. I was so confused until I read Vic Reeves was his stage name! Anyway, he is doing really well on there! Clever man"

"Jim Moir I thought his name was Vic Reeves LOL," a fourth joked.

Despite the confusion, some fans were aware that Vic Reeves is Jim Moir's popular stage name.

"Now it's time for Jim Moir, better known as his stage name Vic Reeves," one fan commented on the social media site.

While appearing on the popular quizzing show, Jim gave a promising start and appeared to have the nation behind him.

But although he got off to a flying start the star hit a bump in the road on his £64,000 question.

Jim was asked by Jeremy: "Stainless steel is an alloy consisting of steel plus a minimum 10% of which other metal?"

After admitting that he was unsure of what the answer could be, Jim used three of his lifelines on the questions.

Once he used one of his lifelines on presenter Jeremy, Jim proceeded to phone two of his friends.

But although his mates tried their best to help, they also seemed to not have a clue of what the answer could be.