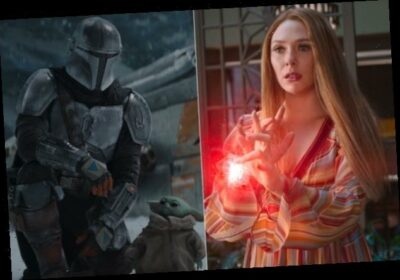 Disney+ has done something even more heroic than the Avengers taking down the mighty Thanos: It made streaming series like “WandaVision” and “The Mandalorian” weekly appointment viewing.

Netflix altered how we all watch television by offering full seasons of shows all at once, which gave viewers more control over when and how they watch their favorite shows. Disney+, on the other hand, has brought the old broadcast television model into streaming by releasing one episode a week, typically on Fridays.

Disney+ is not the first streaming service to put out new episodes on a weekly basis. Other streamers, including Apple TV+ and HBO Max, use the same hybrid model as Hulu. Each service typically releases two or three episodes of a show on its premiere date, followed by weekly rollouts of new episodes. (Apple TV+ even tried a binge model with “Dickinson” for Season 1 before switching to the hybrid model for season 2).

But Disney+, with popular series from Marvel Studios and the “Star Wars” universe, has arguably accomplished what no other service has been able to so far in the nascent streaming wars: Make it seem like you have to watch the episode the day it’s released, for fear of seeing spoilers or being left out of the cultural conversation. In the old pre-DVR days of network TV lineups, these were often referred to as “water-cooler TV shows.”

“It’s essentially like a new opening weekend every week,” Marvel Studios chief content officer Kevin Feige said last week during a virtual TCA session. “It’s unveiling very much in the way we hoped it would. We designed the series to provide a dialogue week-to-week.”

Packed theaters throughout opening weekend during pre-COVID days have instead turned into red-eyed viewers staying up past midnight or getting up early before work to catch the latest episode for fear someone else will spoil it for them. The past two weeks, Disney+ has crashed right after midnight when a new “WandaVision” episode becomes available.

When Netflix releases an entire season at once, it usually splits the audience into two parts: Those who watch the entire season during the opening weekend, and those who watch at their own pace in the ensuing weeks. While it’s a win for consumer choice, it often makes it difficult to collectively talk about it, since everyone’s going at their own pace. That’s why Netflix series often see a big pop at the opening weekend, before tailing off in favor of the next thing Netflix puts in front of us (it’s not like the streamer has trouble when it comes to available inventory).

Disney+ has led the new streaming services in trying to bring back the old model. With the exception of putting the first two episodes of “WandaVision” on the service for its Jan. 15 premiere, Disney+ has released a single episode at a time.

“It’s continued what we like about the ending of our movies, the tag in our movies, just with a more immediate week-to-week structure,” Feige continued. “So we’ll keep proceeding that way until until we learn something new.”

When Netflix made its splash in the original content space in 2013 with “House of Cards” and “Orange Is the New Black,” the streamer upended the traditional TV model by making the entire seasons available at launch, allowing users to consume new shows just as they did Netflix’s vast library of licensed older shows.

Peacock is the only new streaming service that follows Netflix’s lead and releases its entire seasons at once. Amazon mostly veers toward binge-releasing as well, though more recently has experimented with weekly rollouts with series like “The Expanse” and “The Boys.”

But not everyone is in favor of streaming services going back to the older model. In the case of “The Boys,” the switch to a more weekly rollout angered a portion of its fan base. These viewers ended up taking their anger out on the Prime Video series by “review bombing” it.

Vernon Sanders, Amazon Studios’ co-head of television, told TheWrap the streamer decided to switch to a weekly rollout for the very reason Feige is so happy with “WandaVision.”

“It felt like it drove so much conversation, but it was dropped all at once,” Sanders said last summer, regarding the Amazon series’ first season in 2019, which was released all at once.

With “WandaVision” headed into its finale this Friday, we suggest getting up a little bit earlier than usual and watch it before you start your work day. You’ll thank us later.