Will Tiff Butcher die in EastEnders? 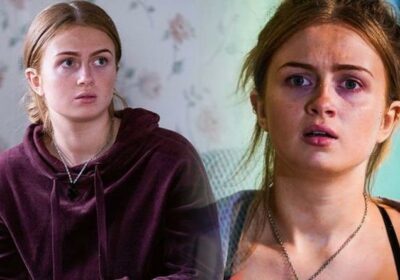 Sid Owen would ‘love to go back’ to Eastenders

EastEnders has been airing on BBC iPlayer during the Olympics and fans have been keeping up with Tiffany Butcher’s (played by Maisie Smith) tragic storyline. She had taken a bad turn after using cosmetic fillers and her husband Keegan Baker (Zack Morris) was concerned about her health. Viewers are worried Tiff will die in the soap, meaning her character will be written off for good.

Will Tiff die in EastEnders?

In the latest instalment of the popular soap, Tiffany was back home recovering after her bad reaction to the fillers.

Her unhealthy obsession with cosmetic products was getting out of control and she ended up apologising to Keegan for giving Bernie (Clair Norris) diet pills.

More trouble could be on the cards for Tiff as Dotty (Milly Zero) started to feel guilty about sleeping with Keegan.

She wanted to tell Tiff the truth, but Keegan was keen to keep the affair a secret.

Tiff is expected to continue to be at the centre of the drama and fans are eager to know whether she dies.

While the character is going through a traumatic time at the moment, she is expected to survive.

The Mail Online reported the door has been left open for Tiff to return, which means she will leave Walford alive.

She could leave after finding out the truth about Keegan’s affair with Dotty.

Or, if her self-confidence continues to spiral, she could decide to leave her home for a fresh start elsewhere.

Fans should be able to rest assured that she will not meet her demise in upcoming episodes.

They had feared for her safety after she was rushed to hospital following a bad experience with lip fillers.

Actress Smith opened up about how relatable the storyline was as teenage insecurities are a real issue.

She told Digital Spy: “She’s a very relatable character on the show. She’s young, she’s in love, and she’s got a lot of pressure on her as well as being a teenager and being hormonal and experiencing what a normal teenager would experience.

“She’s got a lot of insecurities in herself.” Tiff’s husband has been making a name for himself with his job and she is starting to feel insignificant.

Worried she may no longer be enough to please him, she has gone to dangerous lengths to improve her appearance.

Smith said her character’s reaction to the lip fillers would likely be “the last straw”.

Some fans believe Tiffany would die following an allergic reaction to the fillers, but she seems to have pulled through.

They have suggested she may opt for a different kind of cosmetic surgery that may end in trouble.

Her harrowing storyline has been ongoing for many weeks now and she ended up going behind Keegan’s back to pay for more cosmetic procedures.

The situation has been made more difficult since Dotty slept with Keegan, and the truth is yet to come out.

Speaking of the lip filler storyline, she said: “Now she has an infection I don’t think she’ll want to do it again.

“That’s the final straw. She had a lot of people say you don’t need it, you’re absolutely fine, you’re perfect.

“But realistically, if you have a problem with yourself, anyone can tell you that you look beautiful but you’re not going to believe it yourself.”

EastEnders airs on Monday, Tuesday, Thursday and Friday nights on BBC One.