Home » TV & Movies » Why did Victoria Pedretti leave You as Love Quinn?

Why did Victoria Pedretti leave You as Love Quinn? 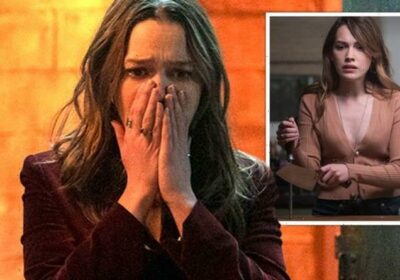 You season three has taken one of the top spots on the Netflix top 10 list and it was full of dark twists and turns. This season saw Love Quinn (played by Victoria Pedretti) take over as the main villain as she failed to curb her thirst for blood. Sadly her actions had fatal consequences as she ended up being killed by her husband Joe (Penn Badgley).

Why did Victoria Pedretti leave You?

You season three was the most unpredictable yet as it saw Joe and Love work through their toxic relationship.

Following the birth of their son Henry, they decided to make a new life for themselves in a quiet suburb in California.

However, Love was unable to fit in with the community and the more she observed Joe, the more unloved she felt.

So much so, that she plotted to kill him as she came to the conclusion he would never truly appreciate her.

Unlucky for Love, Joe had already anticipated her next move and he ended her life with a lethal injection.

After setting fire to the house, it seemed Love Quinn had been written out of the series for good.

Pedretti was a fan-favourite in the series and viewers have wondered why the actress left.

She opened up to Entertainment Weekly about how she knew Love was not destined for this world.

She said: “It was pretty crazy to see the actual way that I was going to die. It felt very unique and strange.

“And I didn’t really understand how to act it out. I don’t know anything about aconite and paralytics so there was a bit of a learning curve, but I was very excited to rise to the challenge.”

Her co-star Badgley said there was nowhere else for Love’s character to go as their arc was complete.

He said: “We’ve gone to a lot of places, seen the highs and the lows, and it felt like, ‘Okay if this is going to happen, it’s time.'”

Pedretti said although she knew her character was going to die, the way it happened was still a huge shock.

Badgley said Love’s death marks a shift in Joe’s character as he has been through so much.

With this in mind, it seems Pedretti was perfectly content with her character dying in the series.

As season four moves to Paris, with Joe searching for his latest obsession Marienne (Tati Gabrielle), it makes sense for Love to be cut off.

She would never have allowed him to make such a move if she was still alive, especially with Henry still in the picture.

Now Love is dead, Joe is free to go wherever he chooses and his heart is set on finding Marienne.

Pedretti admitted she was sad when she watched the death scene back, due to everything her character had been through.

She told Elle.com: “I did start crying as me [as a person], very sad for what the character had to go through.”

As for what her next venture will be, the star said she will be taking on a more directorial role.

She is also experimenting with different avenues in film, away from acting.

Fans took to Twitter to share their thoughts on Love’s death scene, with buttercakeluv saying: “#VictoriaPedretti knocks it out of the park as #lovequinn.

Yashaswi Jaiswal added: “Is Love Quinn really dead? Is there any chance of her survival because I just loved her character.”

You season 3 is streaming on Netflix now.