Why did Leslie leave Love Island USA? What happened to Leslie Golden? 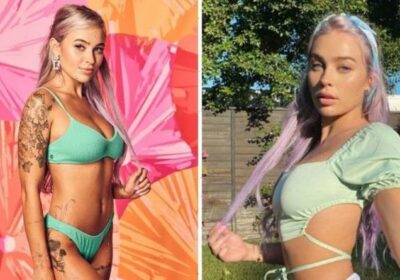 Love Island USA fans got a shock over the weekend when it was revealed that Leslie Golden had walked away from the series, meaning no viewers could vote for her. The star’s decision has left many wondering what is going on for the contestant and why she has left. But what exactly happened to Leslie on the CBS show?

Leslie Golden’s Casa Amor exit was completely unexpected for fans, with no explanation given during the last night’s episode.

The realisation hit when fans tried to vote for her on the official Love Island app and saw that she had gone missing from the selection.

But on the star’s Instagram, she did reveal some insights on why she is no longer part of the dating show.

Taking to her Stories to answer some fan’s questions, one fan asked: “If you don’t hate anyone and love them all, who’d you leave?” (sic)

Her answer didn’t satisfy some fans, as another quickly came back with another question relating to her departure.

The fan added: “Personal reasons! Come on. Let it out!”

Leslie hit back: “No but really, it’s not that deep. Has absolutely nothing to do with anyone in the villa I pinky swear.”

Not letting it rest, another fan asked if the “personal reasons” had anything to do with the drama Leslie went through during her time at Casa Amor.

The star explained: “No, no, no, completely unrelated to the drama I swear! I know how it seems but I have no beef with anyone there.”

At the beginning of the season, Leslie had a hard time getting on with the other girls in the villa.

This eventually led Leslie and Shannon St Clair to fall out, with the drama surrounding the three taking place just before Leslie disappeared from the series.

This is why many fans believe that the star walked away from the villa, but she continues to deny this as the reason.

Leslie has not gone into any further details on what exactly her personal reasons are and has repeatedly stressed on Instagram that she had an amazing time on the show.

She also is assuring fans that she has no hard feelings towards any of the other contestants.

CBS has also not revealed exactly why Leslie left the show, with the network not commenting on the situation.

“I honestly have no idea why they did that,” Leslie continued. “Maybe not to pull focus from the people who are actually in the villa.”

The current season of Love Island USA began on July 7 and will continue to August 15, 2021.

Fans can still vote on the remaining contestants through the Love Island app in the USA, with the rest of the group still remaining.

Leslie joins Slade Parker in walking away from season three, who left on day 14 after joining on day 12 – there are 13 contestants still remaining.