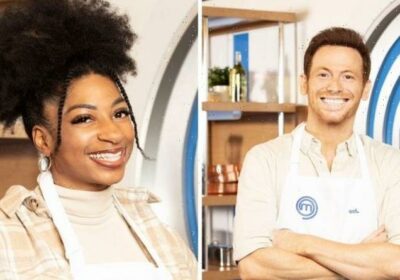 Celebrity MasterChef 2021 has been a particularly challenging season for the would-be celebrity chefs. During the final episode of the BBC One series, the celebs were whittled down to Megan McKenna, Kadeena Cox, and Joe Swash. But only one could take away the ultimate MasterChef prize.

After six weeks of competition, Celebrity MasterChef 2021 finally saw one of the celebrities take home the top prize.

Starting with a 20-strong line-up, only one could win and ultimately it was once again up to judges John Torode and Gregg Wallace.

The last week of the competition has been particularly intense with Cox, Swash, and McKenna scrapping through one of the closest semi-finals yet.

In the end, it was Kadeena Cox, MBE that beat out the others, earning herself the coveted title of Master Chef for 2021.

Following on from her two gold medals from the Toyko Paralympic games, it’s been a stellar year for Cox, with the star overwhelmed by the finale’s victory.

Upon winning, Cox said: “I gave everything I could today. I am absolutely buzzing. This smile is not disappearing from my face for a while.

“I am just proud of myself for doing it. I didn’t change who I was, I learned along the way but I was still Kadeena right to the end.

“It has just been a great journey and one that I am never going to forget.”

To take home the trophy, Cox, along with Swash and McKenna, had two hours to present an immaculate three-course meal.

The winning meal had to be nothing short of perfect, with Cox preparing a starter of torched salmon marinated in lime juice with caviar.

This was followed by a main course of French trimmed rack of lamb and a dessert of Choux au Craquelin filled with mascarpone whipped cream with hazelnut praline crumb.

Staying true to form, Torode and Wallace could only accept the best, and that was Cox’s meal.

Torode reacted: “So many times during this year’s competition I forgot Kadeena had Multiple Sclerosis and was not only battling for the trophy but had her own personal battle going on.

“She just never let up, she didn’t stop! For me, she is a true inspiration. Her food is special, not just because it is technically brilliant but also because it has heart, it’s got soul and it’s got love.”

Wallace added: “What a lovely, lovely final. Today from Kadeena we got very special dishes. It’s not just the quality of Kadeena’s cooking, it’s the originality of the ideas.

“There is a reason she has a bedroom full of medals, she is a serious competitor.”

The Leeds-born athlete started her career as an able-bodied sprinter, before being diagnosed with multiple sclerosis in 2014.

That didn’t slow her down, as she continued her sporting career as a parasport sprinter, eventually leading her to her success in Tokyo 2020.

Much like her other competitors, Cox was thrown in the deep end at the beginning of the competition.

She was immersed into culinary tradition, getting to work alongside and impress top Michelin star chefs.

The final has brought this year’s competition to a close, but MasterChef UK will return next year, with applications already closed.

Celebrity Masterchef 2021 can be viewed on BBC iPlayer.