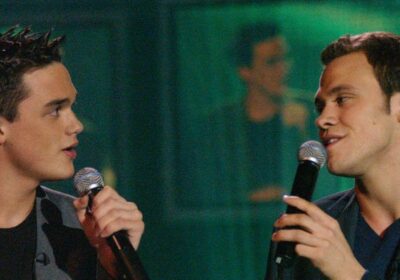 Pop Idol might have only run for two series, but it undeniably produced several huge stars – from Leave Right Now singer Will Young to Loose Women star Michelle McManus.

Notably absent from the usual format was the appearance of Judges’ Houses as in X Factor – instead, the judges would whittle contestants down from a group of 50 until public voting took over.

Pop Idol wasn’t without its fair share of controversy – show boss Simon Fuller went on to file a lawsuit against Simon Cowell for the launch of X Factor, claiming the format was copied from his own brainchild.

Ultimately the issue was settled out of court in 2005, with Fuller made a joint partner in X Factor – and Cowell obliged to remain as a judge on American Idol for a further five years.

But where are the most popular Pop Idol contestants today?

Series one winner Will Young has gone on to have unmitigated chart success.

Will had hit singles including Evergreen, Leave Right Now and Your Game, and has so far released a whopping seven albums, with an eighth due out later this month.

He’s also had a rather extensive acting career, appearing in everything from 2011 TV series Bedlam to Skins.

After soaring to fame as the show winner, Will publicly came out as gay before media outlets could out him.

The star has since spoken out about the homophobia he has experienced, last year admitting thugs actually threatened to stab him while holding hands with a boyfriend.

Speaking to The Times in 2020, Will said: "I was wandering through the East End about 14 years ago, holding hands with my then boyfriend, Julian, and we had people shouting at us. Someone actually threatened to stab us."

The Evergreen hitmaker also spoke about how he was left "aghast" when Radio 1 Breakfast host Chris Moyles appeared to mock him live on-air.

During an interview, the DJ intentionally changed the lyrics to Will’s tracks to play on the fact that he was gay, using an effeminate voice.

Will wrote in his autobiography: "BBC Radio 1 breakfast show DJ Chris Moyles decided to embark on a rampage of homophobia against me – on my birthday no less.

"It was something that left me aghast, especially as he and I were on friendly terms."

He told The Sunday Times last year: “It still makes me feel sad in a way, because it did affect how important I felt my sexuality was, and because I didn't stand up for myself.”

He fell from a bridge after multiple suicide attempts.

Though Gareth placed second in the first series of Pop Idol, he too went on to enjoy plenty of success.

Along with releasing three studio albums and a Best Of album, the star went on to expand his stage portfolio, appearing in the West End production of Joseph and the Amazing Technicolour Dreamcoat in 2009 before going on to play Marius in Les Misérables.

The Anyone Of Us hitmaker went on to appear in series three of Dancing on Ice alongside his professional partner Brianne Delcourt, along with TV appearances on everything from Celebrity Juice to Loose Women.

Gareth tied the knot with actress Suzanne Mole in 2008, but the pair unfortunately split in 2012 before Gareth proposed to Coronation Street star Faye Brooks.

Gareth popped the question during a romantic break in New York back in 2019, after an on-again-off-again relationship, and they were well into wedding planning before splitting once more and calling off the engagement altogether.

The star has one child, 10-year-old Missy, with Suzanne, who he vowed to keep off social media – but he does occasionally allow fans a glimpse of his lookalike daughter.

Posting an adorable snap of the two together on Instagram recently, Gareth wrote: "My entire world. It’s not often I post photos of my little girl – she’s growing up so fast! Daddy loves you."

Gareth has spoken candidly about how he tackled his stammer on-stage, getting involved in a BBC documentary dubbed Stop My Stutter and working on the BBC Lifeline Appeal for the British Stammering Association.

"My speech is a constant battle – I have ups and downs all the time but I know what to do and if I put the work in I can achieve it," he told the Daily Post in 2017.

"As soon as I’m on stage and as soon as I am in character, I’m not me, I am somebody else.

"I adopt a different persona and that seems to work," he added.

"For those two hours I am on stage, I don’t have to think about my speech, it’s really liberating."

Michelle McManus stormed to fame when she won the second series of Pop Idol in 2003.

The star went on to release a full-length album, along with becoming a temporary panelist on Loose Women and guest starring in Scottish sitcom Still Game.

She’s also no stranger to the stage, having starred in the West End production of Discotivity in 2007 and even performing in front of Pope Benedict XVI in September 2010.

But Michelle hit headlines with her impressive weight loss transformation, when she managed to shed an incredible 10 stone with the help of TV nutritionist – and I’m A Celeb legend – Gillian McKeith.

Michelle initially showed off her incredible transformation at a red carpet event with Closer, looking stunning in a brown-and-cream frock with sandals.

The star posed with a hand on her hip and her brunette locks arranged in a sleek bob around her face.

And there was even more good news for Michelle in January last year, when she gave birth to a bouncing baby boy.

The star took an adorable snapshot of her son wearing a cute white babygrow emblazoned with woodland animals, writing: "Last month we welcomed our beautiful son Harry John Nimmo into the world.

"Never could I have imagined this feeling of utter joy and overwhelming love for my little boy.

"My heart is literally bursting with happiness. We love you so much Harry."

Michelle initially tied the knot with Jeff in 2017 in a gorgeous wedding ceremony in the Scottish Highlands.

Scottish singer Darius Campbell shaped something impressive out of his Pop Idol stint after placing third in the first series of the show – but turned down a record deal from Simon Cowell.

The swing superstar has gone on to appear in plenty of stage shows, including Chicago, Gone with the Wind and the Olivier-award winning Guys and Dolls.

He has since gone on to make a cameo appearance in Channel 4 soap Hollyoaks – and has even dabbled in film production.

He was the unlikely producer between the 2016 Hollywood flick Imperium, starring Harry Potter actor Daniel Radcliffe.

Though Jessica Garlick failed to make it to the top three in the first series of Pop Idol, she also made show history – by being the only contestant to ever compete for the UK in the Eurovision Song Contest in 2002.

Jessica rocked the contest with the song Come Back – eventually placing joint third alongside Estonia, in the best result the UK had gained since 1998 and making her the highest scoring UK entrant in the 21st century so far.

Jessica released a further single in 2009 from her unreleased debut album, but since then has not made a return to music.

She married personal trainer Owen Satterley in 2004, and the couple share a daughter, Olivia, and a son, Noah.

But the duo decided to team up after the show, and went on to be a force to be reckoned with in the presenting world, landing plenty of TV gigs.

But the competitive streak never ended between the pair, as they went head-to-head on Dancing on Ice in 2012, with Mark being the third star to leave and Sam leaving in Week Nine.

The duo released two singles, with their 2004 release of With a Little Help from My Friends reaching No1 in the UK charts.

Sam tied the knot with CBBC presenter wife Anne Foy in 2012, and the couple share two children together.

Big Brother contestant Zoe Birkett initially placed fourth in series one of Pop Idol, as one of the shows youngest ever contestants aged just 16.

Zoe went on to release a single, entitled Treat Me Like a Lady, before embarking on an acting career in shows like Priscilla Queen of the Desert and Thriller Live.

In 2014, Zoe entered the Big Brother house – and attracted her fair share of controversy, after implying she didn’t want to stay in the house with Tesco workers.

Speaking to Ash Harrison, Zoe said: "If they’d put me in the house with normal people who were like ‘I work in Tesco', then fair enough.

"But I would have too many stories, too much life experience."

When asked by Big Brother if she thought she was "above people", Zoe responded: "I’ve never said that in my life. I’m a total down to earth person, that’s really annoyed us. I’m not even answering that, that’s a load of rubbish."

Zoe insisted: "I’ve never ever in my life said I’ve been above anybody. If anyone has actually watched that chat they’ll realise I said everybody ends up in the same box. That to me is a load of rubbish."

Zoe later claimed that the chat was "blown out of proportion" – despite housemate Helen Wood scoffing: "Don’t lie, you’ve said it."