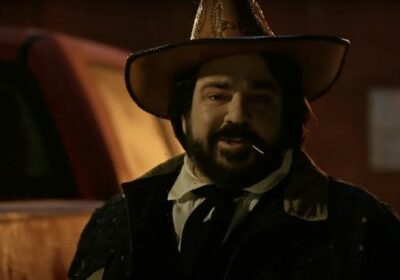 Bad news, Jackie Daytona fans. Sure, What We Do in the Shadows is about to return for a third season, and like an immortal bloodsucker, the FX mockumentary series has already had its life extended with a fourth season renewal. That, of course, is good news, but if you were hoping to see Laszlo Cravensworth (Matt Berry) go on the run again and coach more women’s volleyball as Jackie Daytona, it sounds like they’re putting that particular joke to rest (in a vampire coffin) for now.

Executive producers and writers Paul Simms and Stefani Robinson appeared in a virtual panel for What We Do in the Shadows on Friday as part of the Television Critics Association’s press tour (via The Wrap). Simms chimed in first about the possibility of a Jackie Daytona return, saying:

“I don’t think we could top Jackie Daytona. We talked about it, and we felt like it would be pandering to try to bring him back.”

Robinson is the one who wrote the Emmy-nominated season 2 episode where Laszlo went into hiding and adopted the guise of a bar owner and volleyball enthusiast to evade the vampire Jim, played by Mark Hamill. But we won’t see him again this season. Robinson said:

“He’s not back this season. But I’m sure that when the timing is correct, Jackie Daytona might make an appearance again.”

Honestly, as fun as it might be to see Laszlo posing as “your average American Yankee Doodle Dandy” again, it’s somewhat refreshing to hear that the writers aren’t just going to shoehorn in Jackie Daytona as a bit of fan service. From a storytelling perspective, they would need to find another organic reason for Laszlo to abscond to Pennsylvania (or wherever) and assume his fake identity again. It was amusing to see that happen the first time, but if it becomes a regular gag that they trot out every season, the show might run the risk of beating a dead horse.

Obviously, What We Do in the Shadows is a comedy; it’s not some serious drama where it would strain credulity as much if they manufactured some wild way for Laszlo’s alter ego to return. At the same time, it might be good to give the joke a rest, at least this season, so as not to dilute Daytona’s power. It would certainly mean more then, if and when he does return in season 4.

In the meantime, Laszlo and his roommates have plenty to deal with this season as they adjust to the knowledge that their familiar, Guillermo, has vampire-hunting in his blood. What We Do in the Shadows returns to FX on bat wings on Thursday, September 2, 2021.