Home » TV & Movies » What time is The Masked Singer on tonight?

What time is The Masked Singer on tonight? 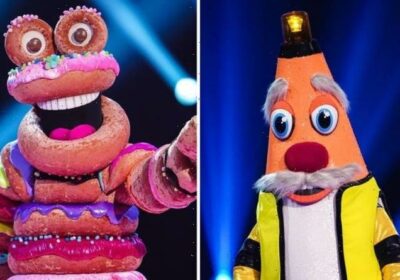 The Masked Singer: Michaela Strachan asked if she is Panda

The Masked Singer sees 12 celebrities battle it out on stage in a bid to be crowned the mystery champion. As the weeks go by, one by one, celebrities are unmasked as they are kicked out of the ITV show. Here’s everything you need to know about watching The Masked Singer this evening.

WARNING: This article contains spoilers from The Masked Singer.

Another five contestants sang their hearts out last weekend, belting out their renditions of some of the world’s best-known love songs.

Poodle, Rockhopper, Bagpipes, Panda and Traffic Cone all gave it their best shot but not everyone could be saved.

After the live audience chose their favourites, Poodle and Bagpipes were left in the bottom two and had to fight it out.

In the end, it was up to the panel to decide who should stay and whose identity was to be revealed.

After some deliberation, Jonathan Ross, Rita Ora, Davina McCall and Mo Gilligan made their decision.

It was Bagpipes’ turn to leave the show and remove his mask which shocked some of the panel.

What time is The Masked Singer on tonight?

The Masked Singer will continue tonight, Saturday, January 22, at 7pm on ITV.

As with previous weeks, the latest instalment will be on for an hour-and-a-half, coming to an end at 8.30pm.

For the first time in the competition this series, all of the remaining eight contestants will take to the stage.

Unfortunately, it’s going to be the end for one of them as another character is forced to leave for good.

There will be no theme as the contestants get to pick whatever song they would like to perform for the audience and panel.

Those left on the show and taking to the stage tonight will be Rockhopper, Poodle, Traffic Cone, Doughnuts, Panda, Firework, Mushroom and RoboBunny.

So whose turn will it be to give their final clues before having their identity exposed?

Of course, none of them wants to suffer the fate of their previous castmates.

The first to leave the competition this series was singer Heather Small who was Chandelier.

Next, it was the turn of Snow Leopard who turned out to be Gloria Hunniford, followed by Lion Fish who was secretly Pop Idol winner Will Young.

Bagpipes was the latest to come out as Pat Cash but now someone else is going to be in the firing line.

The Masked Singer continues every Saturday at 7pm on ITV.