‘What the heck?’ Bradley Walsh baffled by Shaun Wallace’s ‘scary’ behaviour on The Chase 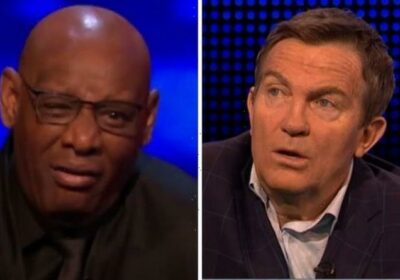 The moment came after The Chase contestant Libby answered a Star Wars question correctly in her cash-builder round, which led to chaser Shaun ‘The Dark Destroyer’ Wallace showcasing his “scary” Chewbacca impression. Bradley Walsh appeared stunned as he commented: “What the heck?” while viewers watching the ITV quiz show admitted they were “scared”.

“I am,” she confirmed. Shaun proceeded to make a bizarre sound as he screwed up his face.

“Is that Chewbacca?” asked the player, to which the barrister answered: “Yeah that’s my Chewbacca impression saying, ‘You’ve got to go’.”

“Sounded like you had piles,” joked Bradley who appeared dumbfounded at the Chaser’s behaviour.

Discussing with her teammates what she should do, she was advised by Julia, Noel and George not to go high.

“Yeah, I mean the questions are easier when they’re in front of you, so you stand a better chance,” Shaun stated.

“But you’re going home,” he swiftly added, prompting Bradley to ask: “I beg your pardon?”

“What the heck?” he asked, looking concerned – and Bradley wasn’t alone as a number of fans were similarly baffled.

“The f*** was that meant to be Shaun? #thechase,” penned David Hendry while Gary B shared: “Jesus Christ Shaun!!! You need to get help! #TheChase.”

Not put off by Shaun’s impression, Libby managed to make it back to the Final Chase alongside Julia.

However, fellow players Noel and George were caught by The Dark Destroyer meaning it was left to Libby and Julia to take on Shaun in the Final Chase.