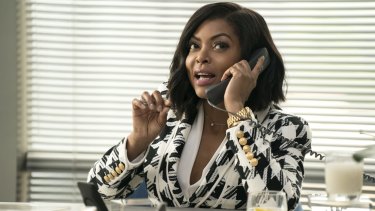 Taraji P. Henson plays Ali Davis, a sports agent who can hear the unspoken thoughts of men, in What Men Want.Credit:Jess Miglio

This is a re-working of the Nancy Meyers rom com What Women Want (2000), in which Mel Gibson was supposed to learn a few salutary lessons about male-female relations. 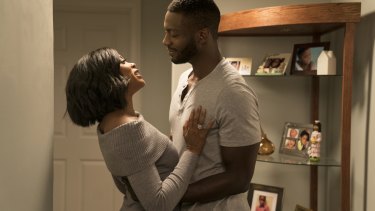 He played a womanising chauvinist who was mysteriously graced with the ability to read women's minds and by the end of the film, we were meant to believe his newly acquired knowledge had transformed him into a sharing, caring metrosexual.

I failed to be convinced, but the box-office went along with it and the film earned enough money for the idea to be classified among Hollywood's list of potential recyclables.

Now, almost two decades later, it's back in a feminist version. Taraji P. Henson stars as Ali Davis, a sports agent who's just been passed over for promotion because of the blokey ethos that governs the company for which she works.

Then fate intervenes. After a freakish accident, she finds that she can hear the unspoken thoughts of every man in the room. 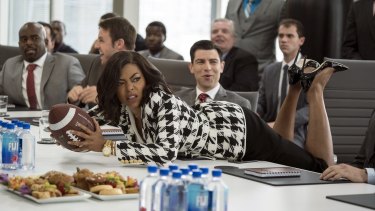 Henson shouts down just about everybody in a highly successful effort to make her character as obnoxious as the ultra-jocks who surround her.Credit:Jess Miglio

Director Adam Shankman, a prolific, if not exactly inspired, maker of rom coms, treats the film as an occasion for gathering together a large collection of comic talents and encouraging them to go for broke.

Henson, who was so engaging as the mathematician Katherine Johnson in Hidden Figures, unleashes her noisy side, figuring perhaps that she would be lost amid the din if she hadn't. She needn't have worried. She successfully shouts down just about everybody in a highly successful effort to make Ali as obnoxious as the ultra-jocks who surround her.

The idea is that she, like Gibson, will learn from her new-found power and start thinking about somebody other than herself. But her transformation is a long time in coming.

In the meantime, while desperately trying to sign up a young basketball star for the agency, she manages to alienate her astoundingly patient boyfriend (Aldis Hodge), all of her girlfriends, and her eternally loyal assistant Brandon (Josh Brener), who's gay and is having an even tougher time of it than she is.

It's the kind of picture in which half the cast seem to have come equipped with their own stand-up comedy routines and are determined to deliver them no matter what anyone else is doing.

Richard Roundtree (Shaft) creates a rare oasis of calm as Ali's father, who's begun to realise that he's supplied her with a lifetime's share of bad advice about the need to win at all costs, and Brener extracts a lot of fun from his performance as the mild-mannered Brandon whose discovery that Ali can read his thoughts turns out to be a liberating experience.

Henson, however, overacts to the point where I soon ceased to care.