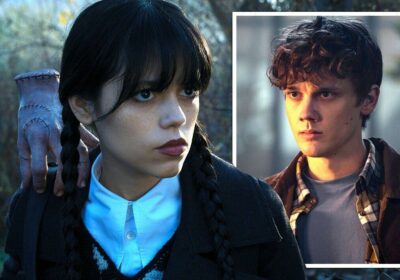 Wednesday is the latest Addams Family adaptation on Netflix and it follows the teenage titular character (played by Jenna Ortega) at Nevermore Academy. She finds herself investigating a serial killer mystery after students start to go missing. The ending included a shocking revelation about the culprit, but is it really who Wednesday thinks?

Wednesday was shipped off to Nevermore Academy for outcasts by her parents after she caused havoc at her previous school.

She was not too interested in making friends and instead became distracted by the school’s dark past.

Wednesday found out the local police were covering up monster attacks and she was determined for the truth to come out.

She came up with various theories as to who it could be, as it appears the monster was able to shapeshift from a human form.

Wednesday thought the mysterious student Xavier Thorpe (Percy Hynes White) was the monster as he seemed to know a lot about what the creature looked like.

But after more evidence came to light, she believed it could have also been her therapist, Valerie Kinbott (Riki Lindhome).

She thought Valerie was in fact Laurel Gates, who had returned to the town to punish those who had hurt her family.

However, when the monster attacked and killed Valerie, Wednesday’s theory fell through.

In the final moments of the series, she visited her love interest Tyler Galpin (Hunter Doohan).

After confessing that she liked him back, the pair shared a kiss but it forced Wednesday to have a vision.

In the vision, she saw the monster transforming back into Tyler after a kill.

Shocked to discover her boyfriend was seemingly the killer, she ran away from him.

However, Wednesday was told numerous times that her visions would not always be accurate.

She was warned they only show a particular side of the truth, and she should not always trust them.

With this in mind, an Express.co.uk theory suggests Tyler could be innocent.

The theory suggests teacher Marilyn Thornhill (Christina Ricci) could in fact be the killer, or is the monster’s master.

She appeared to be in the right place at the right time when Eugene (Moosa Mostafa) was killed in the forest.

Her kind and selfless exterior may simply be a facade to keep people off the scent.

She was seen entering the secret library at the school, so it appears she knows about the town’s history.

The teacher introduced herself as the only ‘Normie’ at the school, but this may not be the case.

As an expert in botany, she could have easily created a type of elixir to cause the monster’s transformation.

Normie’s to not have any supernatural powers, but this does not mean she is incapable of dark things.

She may be Wednesday’s ‘dorm mum’, but she may not be as innocent as she proclaims.

If the series is renewed for a second season, it will hopefully shine a light on whether Wednesday’s vision was correct.

Wednesday is on Netflix now