Home » TV & Movies » ‘We Own This City’ Review: A Hypnotic Look at American Corruption, Drawn from Baltimore’s Recent Past

‘We Own This City’ Review: A Hypnotic Look at American Corruption, Drawn from Baltimore’s Recent Past

When depicting corruption and malpractice on a wide scale, as perpetrated by members of the Baltimore Police Department’s Gun Trace Task Force, there’s a key question of framing. Particularly in a dramatic retelling, leading up to the 2017 arrests and eventual prosecutions of multiple members of the specialized plainclothes police division, “We Own This City” is careful about who gets the lion’s share of the attention and when they get it.

It would be simple for series creators David Simon and George Pelecanos to present their adaptation of Justin Fenton’s book as a six-episode origin story of a mistake, to track Sergeant Wayne Jenkins (Jon Bernthal) from his early days onward, as he ascends the ranks of the BPD and assumes the top post at the GTTF. But it’s telling that “We Own This City” instead takes a more circuitous, non-linear approach. Viewers aren’t being automatically aligned with dirty cops who came upon a preexisting crater of professional misconduct and grabbed shovels to dig even deeper. Instead, anyone who commits to these six hours is put in the shoes of a detective, presented with disparate fragments of a department-wide whole and being guided along the path to piece them together.

That means that the inevitable comparisons to the Baltimore-set, Simon-led series “The Wire” come early and often. Once again, this is a return to interrogation rooms, with official statements doubling as personal biographies. As federal investigators calmly and deliberately extract damning information from Momodu Gondo (McKinley Belcher III), Jemell Rayam (Darrell Britt-Gibson), and other individuals snagged in Jenkins’ expanding web, “We Own the City” hops back and forth between proffer sessions, the early gathering of wiretap info, and the institutional origins of the GTTF itself. What begins as a hazy blend of decade-long instances of illegal arrests and malicious targeting of Baltimore citizens crystallizes into a pattern of collective behavior that seeps out into plenty of other individuals not in Jenkins’ chain of command. 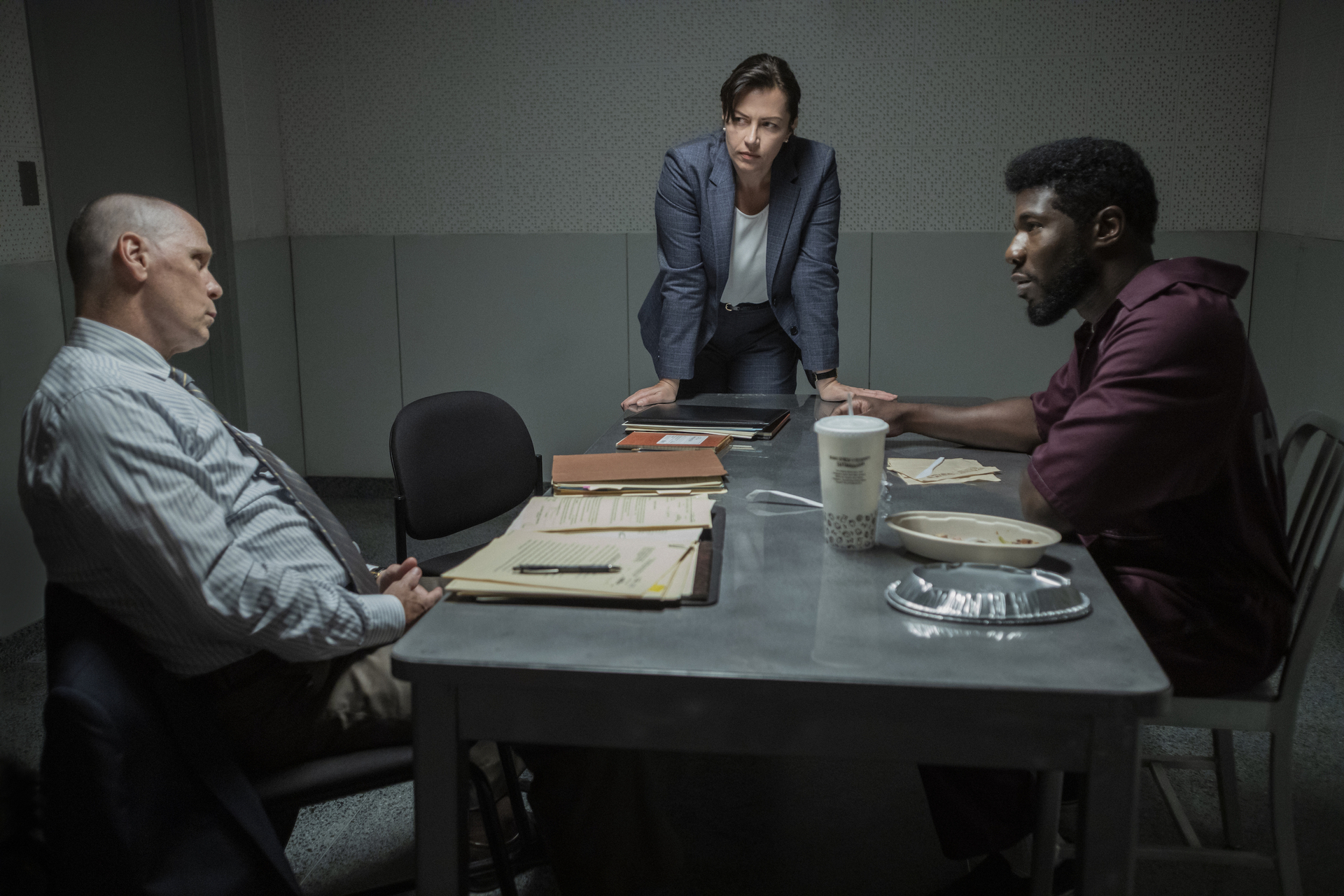 “We Own This City”

In this show’s depiction, Jenkins and many other members of the GTTF lorded over their chosen areas of the city like a band of roving oligarchs, seizing money and weapons regardless of how dubious the pretext. Simon, Pelecanos, and the rest of the “We Own the City” writing staff structure various sections of this story around specific police actions linked by theme rather than time. Rather than operate under the assumption that anyone watching knows the full scope of the mindset that led Jenkins to believe that what he seized for personal gain was rightfully his, “We Own This City” pinholes out from a tiny preexisting idea and shows how and why people were willing to buy into it.

Unmoored from the comfort of an easily trackable, chronological look at the GTTF’s rise and fall, director Reinaldo Marcus Green brings a steady hand to each thread of this investigation. Whether it’s in scenes where FBI agent Erika Jensen (Dagmara Dominczyk) is listening in on unsuspecting targets, county investigators (David Corenswet and Larry Mitchell) are staking out a person of interest, or Jenkins is leading a raid in search of his own ill-gotten gains, Green brings a sense of intimacy to what could easily be sterile or chaotic environments. After-the-fact conversations with men trying to get the best end of a plea deal crackle in the same way that Simon-led shows usually do in those circumstances. Green helps maintain that tension between past and present by not giving these subjects too much room to hide in any given frame.

Even if the show didn’t use the device of police logs to explain when each vignette of Jenkins’ misdeeds occurred, Bernthal is also doing sharp work to help situate each stop along the timeline. Jenkins’ arc isn’t simply an evolution from clean-shaven academy grad to chin-bearded petty tyrant. There’s a full-bodied shift, however gradual, between Bernthal’s physical composure playing the Jenkins of the mid-2000s and the Jenkins who became the focal point of the FBI’s case. The chin seems to jut out a little wider, the gum smacked a little louder. “We Own This City” is thorough enough in this concentrated timespan to show that Jenkins is far from an isolated example, but Bernthal captures the hubris, grievance, and self-loathing that makes him a perfect storm to exploit the city’s shortcomings.

The TV world has its share of detective stories, yet every episode of “We Own This City” drops in a handful of extra details befitting an adaptation of a newspaper reporter’s view of the city. Many of those are concentrated in the story of Sean Suiter (Jamie Hector), a Baltimore homicide detective with a key perspective on the relationship between the department and the city it’s ostensibly serving. Hector is fantastic here, one of a few in this ensemble who are also making a return to this city after memorable roles in “The Wire.” Here, he’s a bridge of sorts between the two series, ones with plenty of shared rhythms, but still indicative of shifting attitudes toward police practices in the decade and a half between them. Some of Suiter’s most memorable moments come when “We Own This City” gives him a few extra beats to silently canvass a crime scene (or when key hints to his perceived value in the office fly by with barely enough time to register them). Suiter is not the only person to point out the relationship between distrust in the police and dysfunction in other areas of the city’s judicial system. As that reality sinks in further for Suiter, Hector becomes another stellar example of how this cast allows just enough suppressed emotion to simmer at the surface. 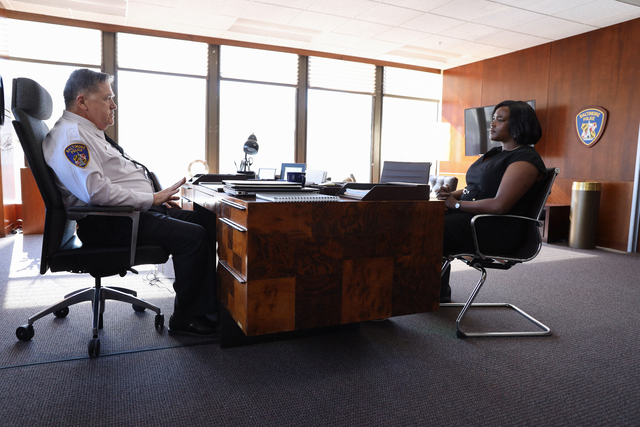 “We Own This City”

With Jenkins as the ringleader and the show’s main way into the misdeeds of him and his cohorts, “We Own This City” has a bevy of potential surrogates following in his wake. Maybe the figure in this tapestry that best mirrors the show’s efforts is Nicole Steele (Wunmi Mosaku), an attorney in the Department of Justice’s Civil Rights division investigating the culture of the BPD. While other characters in “We Own This City” are laser-focused on a single part of the machinery — building a racketeering case, securing a conviction, juicing arrest stats, leaching the city’s budget via fraudulent overtime hours — Steele is the one tasked with looking at the department from an aerial view, particularly the leniency given to those for whom unconstitutional searches and seizures is the norm. That view sharpens through her conversations with aggressively antagonistic cops (Josh Charles brings a potent brand of viciousness to notorious BPD officer Daniel Hersl), top Baltimore brass (Delaney Williams as former city police commissioner Kevin Davis, who gets the last word in the show’s opening credits) and local artists, authors, and activists (some of whom play themselves).

It’s through Steele that “We Own This City” is at its most explicit in identifying the cancerous elements of policing in the city and throughout the country at large. Impunity for habitual offenders, proxy battles over budgetary needs, putting restrictions on officers without also strengthening the rights of individual citizens, and a pervasive warlike approach to public safety: All become glaring roadblocks to institutional change. The mid-2010s setting leads to direct reference to the leadup and ramifications of the 2016 Presidential election. Baltimore is under the microscope here, but this is a show that thrives on specificity. If the mechanisms for reform are slow-moving — an idea central to one of last year’s best TV series — it’s certainly not for lack of evidence.

“We Own This City” certainly isn’t shy about where a significant portion of blame should be placed for the roots of the GTTF’s ills. But like its spiritual HBO predecessor, “We Own This City” gets at the insidious nature of the this whole process as currently constituted, with an ingrained surveillance apparatus, political points based on numbers that hide the real human cost, and a system that requires its own beneficiaries to move the levers of change. To the extent it can, “We Own This City” shows the excesses of the GTTF while also taking time to consider the downstream effects of the lives it left in its wake. All of these actions have consequences, even after decades of self-justification. With a cycle of damage that can easily continue after some of its highest-profile participants are removed from the equation, “We Own This City” makes the case that this is still worthy of our attention even if its story is far from the last.