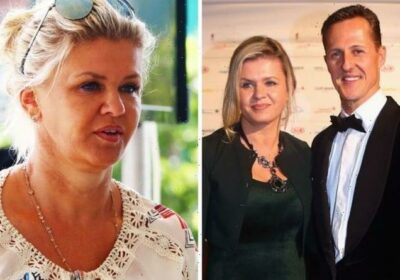 In a new Netflix documentary called Schumacher, which is available to watch from Wednesday, Michael Schumacher’s wife Corinna has opened up about what life has been like since the F1 star’s tragic accident. In December 2013, Michael was skiing in France with his family when he hit his head on a rock. Despite wearing a helmet, he suffered a near-fatal head injury and was rushed to hospital. At the time, the former F1 driver was placed into a medically-induced coma for six months before returning home. He has since been under the care of his family in Lake Geneva.

In the one-off documentary, Corinna has recalled what life has been like for her family since that fateful day.

Despite wanting to keep their life as private as possible, Corinna also opened up about her marriage to Michael.

She admitted Michael’s hectic lifestyle as an F1 driver meant they rarely got any time alone.

Speaking in the programme, the 52-year-old said: “Michael was always one of the last to leave.”

“In the years with Ferrari, he would be in meetings until 10 at night,” she continued.

“We never went out for a nice dinner at a restaurant. No. We sat in this tent the whole time.

“I waited, we ate pasta, we talked, then he was gone again, another meeting, then he came back again.

“But I was thankful for every minute we could spend together.”

Michael has not been seen in public since his accident in 2013, and up until now, his family have remained silent about his health.

Corinna said they wanted to continue to keep their lives as private as possible, as that is what Michael would want.

“It’s very important to me that he can continue to enjoy his private life as much as possible,” she explained.

“Michael always protected us, and now we are protecting Michael.”

He said the night before F1 driver’s first race of the season when all the other drivers had gone home, Michael stayed behind.

“In the Ferrari garage was a car being worked on and it was Michael’s car,” the journalist recalled.

“There were three mechanics and Michael. Michael was talking quietly to the mechanics.”

“I got such a strong impression of how hard Michael was willing to work,” he added.

“How he would be the last one in the garage every night with the mechanic.

“He wouldn’t leave early and go off and do something else.

Schumacher drops on Netflix on September 15.