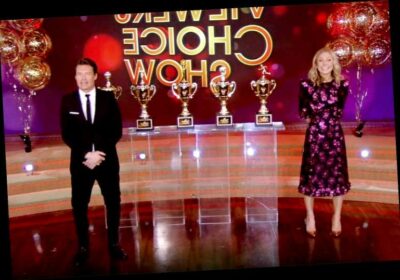 The stars, who co-host Live with Kelly and Ryan, will look back on the 2020 highlights during Friday morning's show, giving out awards in categories including best Halloween, best trivia dancer and best moment of the year, as well as a countdown of the overall top 10 moments on Live from 2020.

In PEOPLE's exclusive sneak peek at the episode, Ripa, 50, and Seacrest, 46, reveal the nominees for best celebrity walkout and share clips of each one.

Comedian David Alan Grier high-fived fans during his walkout, concluding with a well-timed scream standing next to the co-hosts, while actor Jerry O'Connell included Ripa in his walkout dance. Work It actress Liza Koshy earned her nomination for an at-home walkout filmed for a virtual interview, during which she danced down the stairs to MC Hammer's "Can't Touch This." Finally, Property Brothers stars Jonathan and Drew Scott walked out with a special escort — Seacrest himself.

Ripa and Seacrest have hosted Live together since May 2017, but had to spend some of the past year filming separately due to the coronavirus pandemic. They reunited in-person in September to kick off the season 33 premiere of the morning talk show after 180 days apart.

In November, the pair opened up to Entertainment Tonight about the tight bond they've formed while co-hosting.

"He just brings a joyfulness, an enthusiasm, a professionalism and an authenticity to this place that I'm just so grateful to have here," said Ripa.

"I'm using every ounce of energy to fight back tears right now while she's saying that," an emotional Seacrest responded.

"Working with your friends is a great privilege. It is a joy, and I have to say that it is a rare thing to work with a guy who is so authentic and fun and joyful and humble and generous and kind to everyone," Ripa added. "What you see of Ryan on the air is the person he is backstage, which is a unique thing."

Check your local listings for Live with Kelly and Ryan.