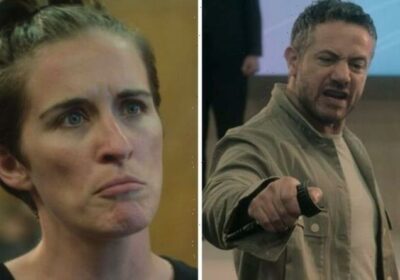 On Sunday night, ITV viewers tuned in to watch the final episode of Vicky McClure’s Trigger Point. Lana Washington (played by Vicky) finally discovered who was behind the bomb threats of the white supremacist group, The Crusaders. Despite dealing with trying to grieve for her brother Billy (Ewan Mitchell), Lana was hellbent on finding out who was responsible for his death.

Over the past few weeks, viewers have come up with their own theories as to who could behind it.

And many of them were right, as the man Lana was having an affair with, Karl (Warren Brown) turned out to be the culprit.

Towards the end of the episode, Karl gave away his identity when Lana worked out it was him all along.

In a crowded room full of MPs and police officers, Karl revealed he was wearing a bomber vest.

He went on to threaten the MP as he claimed she covered up a number of British soldiers’ deaths.

Although luckily, Lana was able to stop the bomb from going off after an armed officer shot Karl.

However, the finale sparked outrage with viewers, and many took to social media to air their anger.

Shelley penned: “Was pretty obvious from the moment he appeared onscreen.”

Chloe raged: “Saw that coming weeks ago, figured that was the red herring they were trying to get us to think and there would be better ending instead of the obvious.” (sic)

While Elle added: “The script is dreadful & the outcome predictable.” (sic)

“Would have been a good 2-hour film, but it’s been a surprisingly dull and slow 6 week waste of time,” PJ fumed. (sic)

Andy went on to say: “Disappointingly predictable. Had hoped it wasn’t that obvious.”

Other fans praised the cast for a great series, Anita commented: “Trigger Point was great. Edge of our seats each week. Roll on series 2. Slightly gutted it was him though. #TriggerPoint.” (sic)

“@Vicky_McClure played a blinder there, what a great series #TriggerPoint,” Dan praised.

Despite the backlash, ITV has since confirmed there will be a series two of Trigger Point.

Vicky McClure will reprise her role as bomb disposal operative ‘Expo’, Lana, for the Metropolitan Police Bomb Disposal Squad in another six-part series.

Speaking about the new series, Head of Drama for ITV, Polly Hill, said: “I am so delighted to see Trigger Point return.

“Vicky is stunning as Lana and it’s brilliantly produced by Jed and HTM, but I also want to congratulate Daniel for his scripts.

“To have held the audience in a state of tension for 6 hours so brilliantly, you can’t believe it’s his first show.

“I can’t wait to see where series two takes Lana and her team.”

Trigger Point is available to view on ITV Hub and BritBox.