Home » TV & Movies » ‘WandaVision’: Kristen Anderson-Lopez on the Happy, Accidental Origins of ‘Agatha All Along’

‘WandaVision’: Kristen Anderson-Lopez on the Happy, Accidental Origins of ‘Agatha All Along’

Kristen Anderson-Lopez already has her Emmys dress ready to go. It’s actually what she’d hoped to wear to last year’s Golden Globes ceremony, which she didn’t attend due to her daughter battling a then-unknown respiratory illness she’d caught on a cruise ship. “She had COVID,” Anderson-Lopez told IndieWire. “We had COVID before we knew it was COVID.”

Thankfully, Anderson-Lopez and her family, including husband and songwriting partner Robert Lopez, made it through, but it only makes the two Emmy nominations the pair have secured for “WandaVision” all the more powerful. Fans and pundits the world over have discussed the role the Disney+ series played in helping them get through the uncertainty of 2020. For Anderson-Lopez, hearing the nomination alongside her daughters and their friends brought it full circle.

“[They] were so obsessed with ‘WandaVision’ every Friday in January and February. It was the thing that was allowing us to connect in a time that we couldn’t physically connect,” she said. Anderson-Lopez said she knew the series had caught on when people started sending her videos and links to fans doing their own renditions of the show’s weekly theme songs. It all culminated with their hit, “Agatha All Along.” “When Kathryn Hahn got to No. 1 on the Billboard charts, above the Biebs [Justin Bieber], she was like ‘What is happening?’” Anderson-Lopez said.

It is “Agatha All Along” that made “WandaVision” impossible to ignore, but the song almost didn’t exist the way fans know it now. Anderson-Lopez said the song was originally presented to them in the script as “That’s So Agatha,” based off the Disney Channel series, “That’s So Raven.” “As the rerun generation we didn’t know ‘That’s So Raven,’ as much as we knew ‘That Girl’ [the 1960s series starring Marlo Thomas],” she said. Robert Lopez crafted a jazzy tune, but Anderson-Lopez kept putting off writing the lyrics — usually a sign she’s not feeling what’s been created.

“The next morning I was in the shower, where I get my best ideas, and I started thinking about ‘The Munsters,’ and ‘The Addams Family,’ and ‘Willy Wonka,’” she said. It was then that she scribbled down the lyrics for her husband to put down on the piano, and a classic was born. Because of the pandemic, the pair didn’t seek celebrity singers to perform the songs. “The bulk of the vocals are me and Bobby simply because the demos were there and we couldn’t get the recording done,” she said. Hahn, thankfully, had a small break in her schedule and was able to come down and sing the song that bears her character’s name. 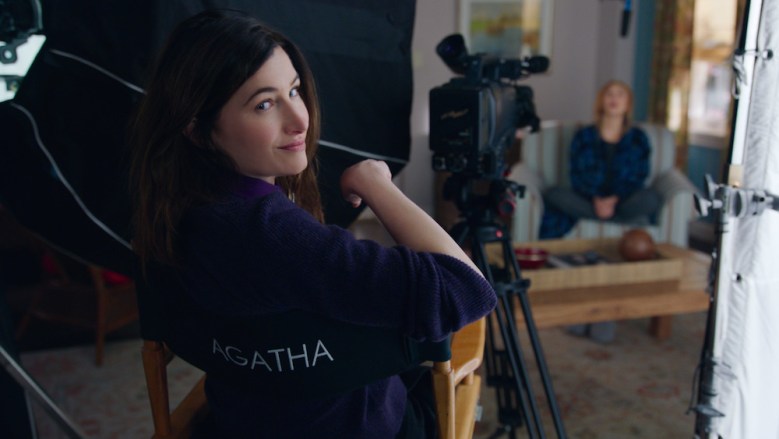 The nomination puts Anderson-Lopez one step closer to an EGOT, a distinction her husband already holds. “It’s mind-boggling and surreal that that could happen,” Anderson-Lopez said, especially considering only four women bear the title. Anderson-Lopez doesn’t put that expectation on herself; she tries to avoid a fixed mindset that could prohibit her from telling her own story. It’s something she’s thought about a lot, especially in the wake of Olympian Simone Biles. “Being called ‘the GOAT, the GOAT,’ of course it gave her the twisties. Because if someone is telling you [that] you’re the greatest of all time it means that all you have to do is go down,” she said.

The Lopezes have become one of the most successful songwriting teams in recent history, a modern-day version of Betty Comden and Adolph Green, the married songwriting duo who penned “On the Town” and “Singin’ in the Rain.” Anderson-Lopez joked, “It’s really fun that I don’t have to worry about interrupting anybody, or him interrupting me, just as I’m making a point.”

At the same time, as a woman in the world of songwriting her journey has been different than her male colleagues — her husband included. “I feel like it’s important to share my story and share whatever experiences I have, so that I can hopefully help clear the path, or clear up some things for other women trying to do what I do,” she said.

Anderson-Lopez started writing and directing musicals at a young age, but was routinely told she should be an actress. “Nobody said, ‘Oh, she’s a writer’ or ‘she’s a director,” she said. She made a go of acting in her twenties but soon realized the work personally bored her and joined the BMI Lehman Engel Musical Theatre Workshop. 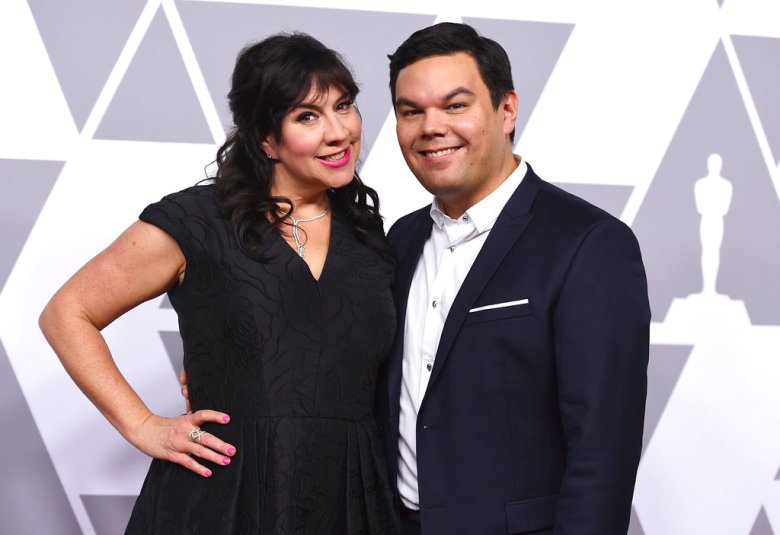 A key voice Anderson-Lopez met during her time there was fellow female composer Lynn Ahrens, the lyricist behind hits like “Once On This Island” and “Ragtime.”

“Lynne Ahrens was there when I auditioned for BMI,” said Anderson-Lopez. “And she was the one who said, ‘Can I hear your third song? So already, I felt like there was a woman in the room responding to what I was saying, because my songs were like, about shaving my legs and taking a quiz in ‘Cosmo’ magazine to figure out if somebody liked me or not.”

In a landscape where women are often left to be unintentional competitors, Anderson-Lopez said she’s lucky that so many of her peers offered their time and expertise. She also said there’s a serious gender disparity that often starts early with women in music. “My husband [was] always a few steps ahead of me […] because he knew what he wanted to do when he was 14. He knew that if he played the piano girls would talk to him because he wasn’t going to get them [through] sports,” she said.

Such romantic motivations are oftentimes espoused by male musicians as opposed to female ones. “For some reason in our culture, it’s so much easier to just say, ‘Oh, I’m obsessed with ‘insert Male Artist here,’” she said. “If we really want gender parity in all aspects of creation, we really need to start feeling more comfortable celebrating the female creators.”

“I’ve been beating the drum of like, ‘Why are there still only 7 percent female creators on Broadway and it’s 2021?’” Anderson-Lopez said. “There’s been a lot of talk about it but not a lot of action.”

That being said, the songwriter said she’s hopeful things are changing and that producers are realizing that hiring diversely yields rich rewards.

“WandaVision” is available to stream on Disney+.