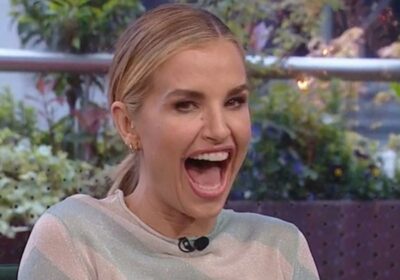 Vogue Williams insisted it’s her husband, Made In Chelsea star Spencer who is the posh one out of the two of them.

She received a grilling from fellow guest Marcus Brigstocke about her posh credentials.

Vogue burst out laughing when she saw the animation they’d made of her, with a cartoon crown alongside a fancy chandelier.

Question number one was: “Do you have membership to any private member's club?”, to which Vogue answered yes.

She was then asked “Do you refer to the toilet as the loo?”

The 35-year-old was adamant in her answer: “no, it’s the toilet! Spencer says loo.”

Marcus then asked if she wears tweed and she responded: “No, but Spenny has a whole tweed outfit. He’s got tweed underpants, they get a little bit itchy so he doesn’t wear them every day.”

The questioning continued with Vogue being asked: “Have you ever had your dinner parties professionally catered?”

She looked sheepish and admitted yes, saying “Maybe I am posh!”

Marcus laughed: “I hate to break this to you, but you’re definitely posh! Do you know any latin phrases?”

“No, but Spencer does” insisted the mother-of-two.

Viewers were quick to side with Vogue, tweeting the show about the questions.

One said: “God alone knows why you are taking the mick out of Vogue for being POSH! Live would be excessively boring if everyone was a chav! I actually quite like the fact that people are different and have no qualms about being called Posh!”

Another added: “Those questions to determine whether someone is 'posh' seemed more likely to identify those with far too much money.”

Someone else joked: “Does Just Eat count as an outside caterer?”

Vogue and Made In Chelsea star spencer tied the knot in 2018, and have two children together.

They have a 2 year-old-son, Theodore, and welcomed a new baby girl, Gigi Margaux in July of last year.