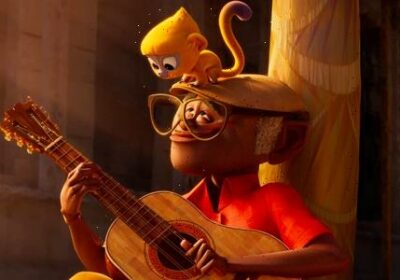 Is it just me, or has it been a while since we all went on an elaborate adventure with a cute, animated animal? Well, never fear, Disney isn’t the only one who can make us fall in love with animals — Netflix is fully in on animated musicals, as they’re proving with the first trailer for their upcoming release, Vivo.

Check out the first trailer for Vivo below.

Vivo clearly takes viewers on a colorful, vibrant adventure and sees the one-of-a-kind kinkajou befriending girl scouts, battling snakes, and traversing dangerous waters — all in the name of love.

We learn in the trailer that Vivo (Lin Manuel Miranda) is a musical animal, happy to spend his days playing music in a lively Havana square beside his beloved owner Andrés (Juan de Marcos). Their shared love of music is the basis of their friendship and that connection puts them perfectly in sync.

But Vivo’s adventure takes him from Andrés’ side when his owner receives a letter from his long-lost love — a now-famous Marta Sandoval (Gloria Estefan) who hopes to reconnect with her former partner. Andrés admits that he never confessed his feelings to Marta, but instead channeled them into a song — and Vivo agrees to deliver the heartfelt message that his friend never could.

Here’s where their friendship gets complicated: Vivo sets off on a journey that, with each step, puts more distance between him and Andrés. At the same time, all he’s willing to do is the ultimate declaration of dedication to his friend. Vivo is a story about the lengths you’re willing to go for the things that matter the most — love and friendship.

On his travels, Vivo enlists the help of an energetic tween, Gaby (newcomer Ynairaly Simo) and as they struggle to deliver Andrés’ song, the world opens up around them.

What You Need to Know About Vivo

The musical features eight original songs written by Miranda himself. His music, as it so often does, captures the bursting joy of the film’s themes. It perfectly matches the golden hues glowing onscreen. Director Kirk DeMicco (who previously worked on The Croods) shared that the colors were built into the identity of the film, saying

“We’ve never had a big CG-animated movie that really explores Caribbean color palettes, from the color of the buildings to the sun and the sky. We were able to capture the elegance of Cuba and follow Vivo and Gabi to the kitschy, fun-loving world of Key West to the sleek, sophisticated Miami.”

It looks like the film also plays around with various animation styles,  harkening back to Netflix’ recent work on The Mitchells vs The Machines, which went on to set viewing records.

Miranda rejoins two past collaborators on Vivo, a film written by In The Heights screenwriter, Quiara Alegria Hudes. The musicals composer and executive music producer is Alex Lacamoire, his Hamilton collaborator.