Virgin River season 4: Will Muriel and Doc start a relationship after Hope tragedy? 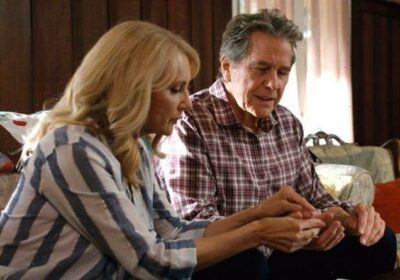 Virgin River fans are eagerly awaiting news of season four since the third outing arrived on Netflix. The latest season included plenty of dramatic twists, and fans noticed Hope McCrea’s (played by Annette O’Toole) absence. This could pave the way for a new relationship between Doc Mullins (Tim Matheson) and Muriel (Teryl Rothery).

Will Muriel and Doc start a relationship?

Virgin River season three left fans on the edge of their seats as they discovered Hope was out of town.

She was visiting her elderly aunt when a hurricane hit the area, and Doc was concerned for her safety.

The mayor of Virgin River was eventually seen via a video chat with Doc, and she explained she would need to remain with her aunt for another couple of weeks.

This was until she discovered the news of her best friend Lilly’s (Lynda Boyd) death and decided to come home.

She was keen to make it back in time for the funeral but was involved in a car accident on the way.

In the season finale, viewers learned that Hope had suffered severe damage to her brain in the accident.

Doc decided it would be best to put her in a medically-induced coma, so her brain could rest and recover.

With Hope out of the picture, fans are worried Muriel may swoop in and claim Doc for herself.

Muriel has always been open about her feelings for Doc and her friends mock her for taking a liking to him.

They warned her that she should prevent developing any romantic attachment, as Doc was devoted to Hope.

Whilst Hope was away, Muriel took the opportunity to get even closer to Doc, catering to his every need.

She would cook meals for him and keep him company in the evenings, but Doc seemed none the wiser regarding her intentions.

The creators of the series have made it clear Muriel has intense feelings for the GP, just by the way she looks at him.

With Doc now in an emotionally vulnerable position, Muriel could use this to her advantage.

However, there is a high chance her friends will intervene and tell her to back off.

Fans are keen to know whether Hope has left the series for good, but it seems she will be back soon.

The main reason for her absence in season three is due to the coronavirus pandemic, as she was unable to travel to the filming location.

A clever storyline was created in order for her to be involved in the season, but not on-screen.

The show’s creators have already talked about her return in a fourth season if the show is renewed.

Viewers are yet to see Hope and Doc renew their vows, so this will hopefully happen following her recovery.

O’Toole has not given anything away about her future role in the series, so fans have been left to speculate.

They have taken to Twitter to share their thoughts on the latest season, with one saying: “virgin river moots I want Muriel with doc so bad wtf is wrong with me????” [Sic]

However, one viewer was not as keen on the storyline, saying: “Season 2 of Virgin River is truly awful.

“This whole Hope/Doc/Muriel storyline is like something out of junior high school. Save yourself.”

Hopefully, Muriel will do the right thing and leave Hope and Doc to work on their relationship.