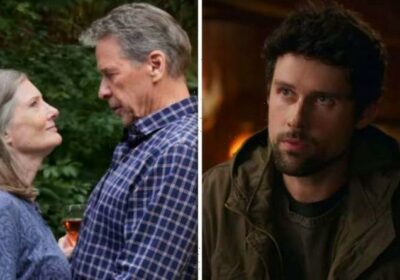 Virgin River: Behind the scenes on season four filming

Alexandra Breckenridge and the cast of Virgin River are back on set this month filming the highly anticipated fourth instalment of the popular romantic drama. A recent video released on Instagram has revealed a new look at the cast of the Netflix series, and the appearance of some familiar faces could provide some spoilers for what’s coming next.

Former Marine Dan Brady (played by Ben Hollingsworth) appears to be walking free in the upcoming instalment of Virgin River.

The series regular has fuelled fan theories by turning up in the show’s recent sneak peek from behind-the-scenes.

His co-star Breckenridge introduced the short clip, before revealing the likes of Annette O’Toole, Sarah Dugdale and Tim Matheson.

While most of the cast were expected to return for season four, Brady’s fate was up in the air by the end of season four.

To recap, the town was left reeling after the second season when Jack Sheridan (Martin Henderson) was found shot in the back of his bar.

However, the people of Virgin River were still none the wiser to who actually attacked him by the end of season three.

Jack’s friend Brady has been top of the list of suspects after he fell in with local drug dealer Calvin (David Cubitt), despite warnings to stay away.

It seems Calvin is setting up Brady to take the fall for the botched shooting, however, after the same gun used to injure Jack was found in his car.

But, now Hollingsworth has been spotted on the set, Virgin River seems to be inching closer to uncovering the truth.

Of course, the actor may simply be on location with the rest of the cast and not actually filming a scene for the new season.

However, this seems unlikely as the cast all appear to be in costume in the new video.

Moreover, fans are convinced the actors are filming a pivotal scene for the start of the new season which would require most of the town’s attendance; a wedding.

IG user annalisapurcell speculated: “Looks like they are filming a wedding.”

And mytambyzafndrkt commented: “There are Doc and Hope. You know what I mean ….. a wedding.”

Finally, Forloveofvirginriver said: “Now my head is buzzing with questions on what scene they’re dressed for… wedding reception?”

With O’Toole’s Hope McCrea back in the picture after her heavily reduced role last year, there’s a good chance she and Doc (Matheson) will finally get around to renewing their vows.

O’Toole took a step back from the series to stay safe during the coronavirus pandemic, but her return could bring the whole town out in celebration, including Brady.

If Brady is indeed absolved from the false accusations, Jack will finally be able to rest easy knowing his friend is safe and the real culprit has been brought to justice.

Virgin River season 4 will be released in 2022 on Netflix.