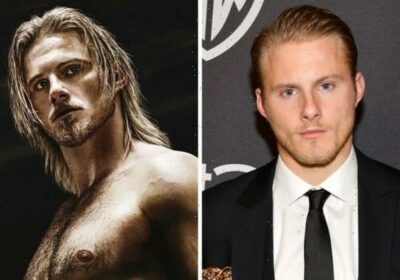 Alexander Ludwig joins Arrow star Stephen Amell in the upcoming Starz series, Heels. Ahead of the thrilling sports drama’s premiere in August, the Vikings alum opened up exclusively to Express.co.uk about taking on another action-heavy role after his five-season stint as Bjorn Ironside came to an end last year.

Set against the backdrop of small town Georgia, Heels follows the lives of Ace and Jack Spade, two brothers and pro wrestlers whose personal struggles are laid bare in the ring.

Speaking to Express.co.uk, Ludwig explained that paying respect to the experiences of real wrestlers was at the forefront of his mind when taking on the new role.

He recalled: “The one thing that was really important to Stephen and I, and everyone on the cast and crew, was honouring the true athleticism that comes from being a wrestler.”

“These guys use and abuse their bodies day in and day out, with no help if they get injured.”

“It’s madness, I don’t know how these guys do it.”

From choreographed matches to impromptu bar fights, Ace Spade is primarily characterised by his physicality throughout the series.

Ludwig explores Ace’s grief over his late father’s unexpected suicide with an impressively layered performance, but he also had to make sure he kept in the best shape possible.

In order to give professional wrestling its due, both Ludwig and Amell trained constantly both before and during production for the series.

“For us, it was so important that we were able to portray that authentically, and that just came with a lot of training,” Ludwig said.

“We obviously wanted people to love the show for the drama, but we wanted the wrestling community to know these actors really put in the work. And we did.”

Heels’ cast made full use of an on-site gym built during COVID last year to ensure they all maintained their athletic physiques.

Alexander Ludwig and his castmates were also constantly in the ring trying out new stunts and wrestling moves.

He admitted: “It was certainly the most physically demanding show I’ve ever been a part of.”

Fresh from his tenure as the Viking warrior Bjorn Ironside, Ludwig was challenged even further by his role as Ace Spade.

Luckily, the actor finished production unscathed, though sadly the same couldn’t be said for his co-star.

Back in October 2020, Starz announced Stephen Amell had injured his back during filming for the new series, shortly after the actor himself confirmed he had battled COVID-19.

Thankfully, the show’s co-lead was able to return to filming after a short recovery period, and Heels is well on its way to becoming another major hit for Starz this summer.

As Alexander Ludwig summed up: “It can be painful at times, but it’s also so rewarding.”