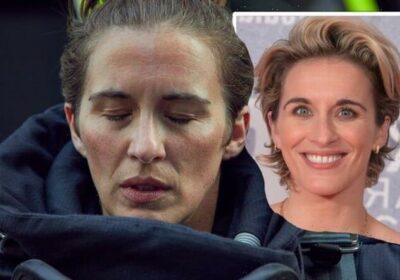 Trigger Point has been airing on ITV and the thriller hails from Line of Duty creator, Jed Mercurio. Mercurio was excited to work once more with Vicky McClure, who plays bomb disposal expert, Lana Washington. She will be reprising her role for another six-episode season but has expressed an interest in other future TV roles.

The second season of Trigger Point is due to air in 2023, with the cast and crew saying it was “an honour” to continue Lana’s story.

Writer Daniel Brierley said there are many more twists and turns to come and he was thrilled with the public’s response to the first season.

Ahead of the debut season’s arrival, Vicky McClure spoke to Express.co.uk and other media about her future in acting.

Opening up on some of the different genres she would love to try, she said: “I want to do a rom-com.

“Something really light and funny would be lovely, not that I’m funny but-“

Co-star Adrian Lester interjected, reassuring her: “Yes you are, you are funny, she is very funny.”

Vicky continued: “I’m just a bit of an idiot really, I’m laughed at, not laughed with.

“But, I don’t have any plans or anything that’s sort of… I’m just lucky to be working with great people on great projects.

“But yeah, a rom-com would be a light relief.”

While some fans compared her latest venture to Line of Duty, she said her characters Kate Fleming and Lana Washington were worlds apart.

Although she is still great friends with her Line of Duty co-stars, and touched on giving presents to Adrian Dunbar and Martin Compston.

She said: “I don’t get them Christmas presents but we do tend to shoot Line of Duty up until Christmas.

“So we get wrap presents for each other and they are always very thoughtful.

“And I’m pretty sure when Martin had his baby, we did buy his baby a waistcoat.”

Compston had previously addressed why his character always wore waistcoats in the police drama, saying he felt like “Sherlock Holmes”.

Addressing the differences between the characters she has played, McClure said: “I look at Lana and Kate and I don’t see them together as the same people at all.

“Not only with the way that Lana looks and the way we have designed that, her personality is very different.

“They are both very strong women for sure, and very brave and committed.

“But that’s the kind of roles I love to take because it’s just something that.”

The actress said she was always keen on playing “the male’s role” because of their strength and commitment.

She said: “I’m always going to be drawn to that.”

There may not be a McClure romantic-comedy in sight for a while as she will be working on the second season of Trigger Point.

In the finale, Karl Maguire (Warren Brown) was revealed to have been orchestrating the terror attacks on London.

He and Lana had shared some romantic moments, which initially threw viewers off the scent.

If Lana had felt the same way towards him, perhaps things would have ended differently.

Trigger Point season 1 is available to watch on ITV Hub. A second season has also been commissioned.