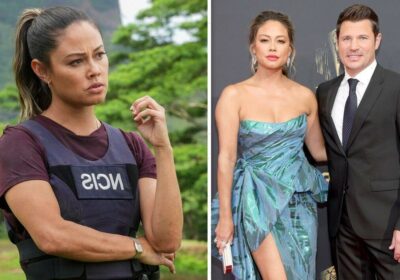 NCIS Hawaii is the most recent spin-off from the wildly popular CBS crime drama. Launching in 2021, the series was fronted by Vanessa Lachey in the role of Special Agent in Charge Jane Tennant as she oversees the Pearl Harbor Office. Viewers of NCIS Hawaii are curious about Vanessa’s life away from the show and her partner in real life.

Vanessa is a model, actress and television presenter as well as working the American beauty pageant circuit as a teen and earned the title of Miss Teen USA in 1998.

Prior to marrying Vanessa, Nick wed Noughties pop star Jessica Simpson with the couple together for four years.

They even had their own reality series Newlyweds: Nick and Jessica which ran for 41 episodes before wrapping up in 2005 after two years.

Nick and Vanessa met in 2006 on the set of his music video What’s Left Of Me where she played his love interest.

In the music video, Vanessa and Nick portrayed a couple in a fractious relationship which sadly came to an end.

The song was the title track of one of his solo albums following the end of 98 Degrees.

Vanessa and Nick met shortly after his split from his first wife before they started dating.

Nick and Vanessa has a short breakup in 2009 but reunited and got hitched in 2011 with the couple now having three children together: Cameron, Phoenix and Elisabeth.

Vanessa recently paid tribute to her husband in a sweet Instagram post, where she shared a clip from the What’s Left Of Me music video.

Underneath the post, she told her one million followers: “#FBF Happy Sweet 16, Baby! To this record & to the beginning of the rest of our lives together.

“I know I mess with you, but I am your BIGGEST fan! Truly, your heart and your voice are so sexy, I’m one lucky gal!”

Vanessa often shares snaps of her work and family life on Instagram, including some cute pictures with her husband Nick.

Both Vanessa and Nick host Netflix’s reality series Love Is Blind, where they talk the participants through the various rounds of the show.

They also front the Netflix reality show The Ultimatum: Marry Me or Move On in which couples in long-term relationships decide whether to tie the knot or go their separate ways.

Vanessa has spoken candidly about her relationship on The Ultimatum, admitting they had couple’s therapy.

She also revealed she used to secretly go through her husband’s phone, but no longer does so.

Vanessa also spoke about how she felt the impact of Nick’s first marriage and very public divorce.

Speaking to the contestants on The Ultimatum, she said: “He was literally in a very public marriage and a very public divorce, and I had to go through all that s*** very publicly and it was very hard for us.”

NCIS: Hawaii airs on CBS on Mondays at 10/9c is available to watch on Paramount Plus