Home » TV & Movies » UK in bid for prisoner swap to save British soldiers from execution ‘Unacceptable!’

UK in bid for prisoner swap to save British soldiers from execution ‘Unacceptable!’ 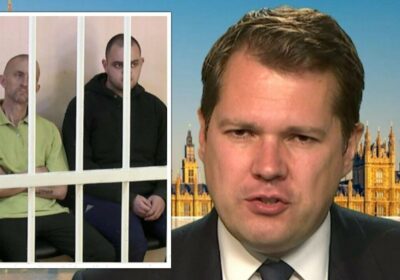 The Newark MP told Good Morning Britain viewers about the UK’s bid to rescue Aiden Aslin, 28, and Shaun Pinner, 48, who were captured while fighting for Ukraine. The Britons have been sentenced to death by a Russian court in eastern Ukraine, and Jenrick stressed how they “need to be swapped for Russian prisoners of war” on the ITV news programme.

Jenrick told hosts Kate Garraway and Ben Shephard: “I think as their local MP, I need to push this matter as much as I can and I think the Foreign Secretary and her ministers should be in the most robust conversation with the Russian Ambassador to say, ‘You cannot treat British citizens in this manner.’

“They need to give assurances to these individuals that they are protected and they need to be swapped for Russian prisoners of war in the normal way.”

When Shephard asked Jenrick if he has spoken to Foreign Secretary Liz Truss about whether the Russian Ambassador will speak to her about the situation, he said: “We should be sending the clearest signal possible that it is unacceptable behaviour.

“In terms of the likelihood of a prisoner swap, I hope that will be the ultimate outcome, both sides in the conflict have a number of prisoners of war – Russia has 1,000 Ukrainian soldiers and Ukraine has a couple of thousands Russians and prisoner swaps have happened in the recent past.

“So there is every reason to believe that’s possible, but Russia has been going slow on this issue so they can have propaganda purposes and they obviously care much less about the families of their own soldiers than any government cares about supporting their own citizens and prisoners of war.”

Jenrick met with the Ukrainian Ambassador on Thursday evening in London and said he gave assurances the Ukrainians will give priority to the two Britons in the prisoner swap negotiations.

“So let’s hope that is the ultimate outcome that we get them back home to their family and friends,” he exclaimed.

“But in the meantime, we have to be very clear and robust with Russia.

“They can’t take British citizens hostage and think they are going to get some kind of political advantage out of it.”

Aslin and Pinner were charged with being mercenaries despite being members of the Ukraine armed forces.

The court which passed the sentence is in the pro-Russian Donetsk People’s Republic and is not internationally recognised.

Their families have insisted the men are long-serving members of the Ukrainian military and not mercenaries.

Jenrick added: “You can only imagine how worrying this situation is for them.

“I was also outraged British citizens could be treated in this manner, they have been hooked out of the normal process that you would use to treat prisoners of war and put on this Soviet-era styled show-trial and now sentenced for no good reason whatsoever.”

He stressed how they are “innocent people” and believes it is “absolutely appalling” to be treated how they have.

Jenrick said prisoner swaps have been happening between the Ukrainian and Russian armed forces.

“They need to be brought home through a prisoner swap as quickly as possible,” the MP added.

Truss has also condemned the sentencing and tweeted: “I utterly condemn the sentencing of Aiden Aslin and Shaun Pinner held by Russian proxies in eastern Ukraine.

“They are prisoners of war. This is a sham judgment with absolutely no legitimacy.

“My thoughts are with the families. We continue to do everything we can to support them.”

Good Morning Britain continues on weekdays at 6am on ITV.