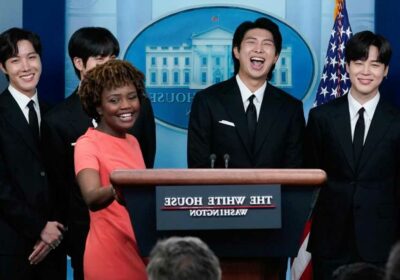 Tucker Carlson learned a valuable lesson today: If you come for K-pop, the K-pop fans will come for you.

Speaking on Tucker Carlson Tonight Tuesday, the Fox News host and noted Russian sycophant took aim at K-pop’s most dangerous target: BTS. The global megastars were in Washington to discuss “Asian inclusion and representation” and address anti-Asian discrimination with President Joe Biden — something that just didn’t sit right with Tucker.

“Yeah, so we got a Korean pop group to discuss anti-Asian hate crimes in the United States,” he said. “Okay. Good job, guys.”

If questioning the activism of one of the most popular musical artists on the planet wasn’t enough to enrage the digital infantry of the BTS fan ARMY, Carlson later suggested extending White House invites to youth icons like BTS was helping “degrade” America. “And it’s working,” he added.

'Silence of the Lambs': The Complete Buffalo Bill Story

How True Is 'Respect'? Fact-Checking the Aretha Franklin Biopic

Upon learning of Carlson’s comments, Twitter (rightfully) lost its shit, exploding with memes and fervent prayers for ARMY  to decimate the Fox figurehead into oblivion. “He doesn’t know the force he just awoke,” one user tweeted — and anyone unfortunate enough to have made even a lighthearted joke about BTS online would call that assessment an understatement. Force? More like an unrelenting, 24/7 onslaught of pain. In short: RIP to Tucker’s mentions.

The cable news charlatan is seemingly unaware that the K-pop powerhouse — comprised of Jungkook, V, Jimin, Suga, Jin, RM, and J-Hope —  have previously spoken out against anti-Asian violence in the U.S., so their White House invite isn’t exactly the stretch Carlson makes it out to be. In March 2021, BTS addressed the then-recent wave of crime targeting Asians across America. “We stand against racial discrimination,” BTS wrote in a statement accompanied by the hashtags #StopAsianHate and #StopAAPIHate. “We recall moments when we faced discrimination as Asians. We have endured expletives without reason and were mocked for the way we look. We were even asked why Asians spoke in English.”

“The way we think is that everything that we do, and our existence itself, is contributing to the hope for leaving this xenophobia, these negative things, behind. It’s our hope, too, that people in the minority will draw some energy and strength from our existence,” RM told Rolling Stone in the group’s May 2021 cover story. “Yes, there’s xenophobia, but there are also a lot of people who are very accepting. . . . The fact that we have faced success in the United States is very meaningful in and of itself.”

Ultimately, the BTS comments merely served as a poorly planned preamble to an interview with fellow shit-stirrer Candace Owens discussing the “disarray” of the Biden White House. BTS will likely remain unbothered by Carlson’s quip — especially ahead of the upcoming release of their anthology album, Proof. But Tucker? He just guaranteed his replies will become a wasteland of Jimin fancams and J-Hope GIFs for all eternity.