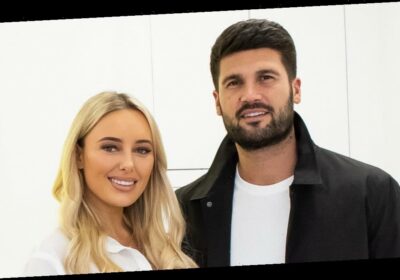 Amber Turner left her The Only Way Is Essex star co-stars in shock on Sunday night as she announced she is "going to be a mother."

The 27 year old, who is dating her fellow cast member Dan Edgar, 30, surprised her closest friends when she made the announcement during the latest episode of the hit ITVBe show.

Blonde beauty Amber was seen with pals Courtney Green, Chloe Meadows and Chloe Brockett as they gathered ahead of Mother's Day.

Courtney address the group as they met in a field: "The whole point of this task is to make flowers for Mother's Day."

Amber dropped the bombshell as she replied: "Okay, well I'm going to make them for myself because I'm going to be a mother soon."

As the trio's mouths dropped to the floor and let out huge gasps, she continued: "Girls… well no, when Dan buys me a little baby dog. I'm going to be a dog mum!"

Courtney exclaimed: "Oh my God, Amber, I literally just c**pped myself." as Chloe Meadows asked: "Amber, honestly, how many times have you FaceTimed Dan since we've been here?"

Amber said of her on-off beau: "I miss him! No, I'm joking. I feel like, now, obviously we are living together, it has been really nice.

"We're all loved up! And he did actually say the other day, 'I was a bit nervous', he was like, 'We get on so well and it's actually been really nice, I'm really happy,' and I was like, 'Aww'.

"I was like, 'I told you, I did tell you it was going to be fine'," she joked as the conversation turned to how her pals had found the most recent lockdown. TOWIE stars: Past and present

Elsewhere in the episode, Harry Derbidge was seen having a tense conversation with his cousin Amy Childs about her friendship with his ex-boyfriend Bobby Norris.

In an OK! online exclusive clip, Harry was seen telling Amy when grilled on the friendship: "I don't hate anyone but, do I think it's a bit weird? Probably."

The Only Way Is Essex airs Sundays at 9pm on ITVBe.