‘Tomorrow’ Finale: One Theory Proven Wrong – Here’s What Happens to the Characters

The finale of Netflix’s Tomorrow K-drama closed the story of Goo Ryeon, Joong-gil, and the rest of the characters. But it also proved that one theory fans were predicting from the start was not true. Fans theorized by multiple clues in the K-drama that Jun-woong was connected to Goo Ryeon and Joong-gil. Tomorrow’s finale took a different turn than what fans expected but still ended on a good note.

As fans were looking for clues about how Goo Ryeon and Joong-gil were connected in their pasts, they also started to theorize about Jun-woong. The character became a half-human half-grim reaper after accidentally falling into the river and going into a coma.

There were clues implying that he has a deeper connection to Goo Ryeon and could have possibly been her unborn child reincarnated. In Tomorrow, he calls to his mother when he is in the river when he sees Goo Ryeon saving him. He also saved comfort women from Japanese soldiers in his past life.

According to Goo Ryeon’s tragic past, she was married to Joong-gil before being taken by barbarians. After saving herself and the others, they make it to town but are labeled as ‘Returning women.’ Townspeople spread rumors that she used her body to win her escape and is pregnant with the child of a barbarian.

Clues in her past had fans speculating Goo Ryeon was pregnant before her death but with Joong-gil’s child. Fans were hoping the theory was true, but by the Tomorrow finale, Jun-woong has no real connection to Goo Ryeon or Joong-gil.

In the final two episodes of Tomorrow, the team takes on a new case that hits close to home for Goo Ryeon. K-pop idol and actor Choi -hui (Kim Si-Eun) is the reincarnation of Goo Ryeon’s court maid. She is in the red zone as online bullying takes its toll on her. In Tomorrow Episode 15, Joong-gil hears from other reapers about Goo Ryeon’s past and wants answers.

As Choi-hui puts herself at risk in oncoming traffic, he stops time to confront Goo Ryeon. When she refuses to give him answers, he uses the reaper’s promise and forces Goo Ryeon not to save Choi-hui. Seeing her longtime friend on the brink of death sends Goo Ryeon on the path to revenge.

She goes after the people who made the malicious comments about Choi-hui that led her to want to die. But along the way, Goo Ryeon breaks one of the afterlife rules and makes their existence known to the public. She is in jeopardy of returning to hell.

In the Tomorrow finale, Jun-woong looks for a way to save her. He asks Joon-woong for help and blames him for what Goo Ryeon is doing and forces him to look into his nightmares for the answer. Jun-woong learns the tragic truth about Goo Ryeon and their past lives together. 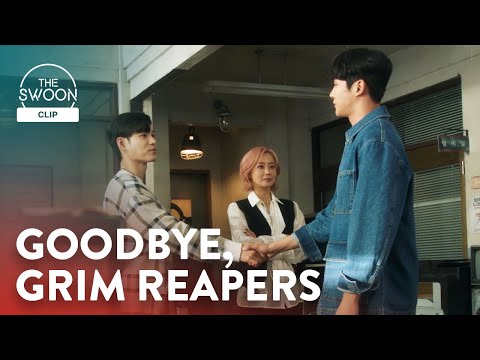 Now knowing the truth about Goo Ryeon, Joong-gil tries to make things right. As the leader of hell is after Goo Ryeon, Joong-gil gets in his way and allows her to escape to save Choi-hui. Once successful, Goo Ryeon turns herself into the Emperor for punishment but learns Joong-gil has taken the fall.

The Emperor and the other reapers convince the ruler of hell that Joong-gil would have never helped Go Ryeon because of his hatred for her. Meanwhile, Jun-woong tells Choi-hui the truth about being reapers, his story, and the afterlife. He cooks her, Goo Ryeon, and Ryung-gu a meal together as a family. They also give Choi-hui the necessary evidence to file a lawsuit against the people who bullied her.

Goo Ryoen visits Joong-gil and explains she never told him the truth because their ties were severed long ago. Joong-gil admits he did not save her because of leftover feelings but his pride and knowing the damage he caused. Tomorrow’s finale has Goo Ryeon realize she also needed saving despite wishing to sever all ties to her old life.

The K-drama ends with Jun-woong being sent home early, getting a job, and perks. Back in his old life, he still has a good heart and saved one of his co-workers from jumping off the roof. He also meets Goo Ryeon, Ryung-gu, and Joong-gil again. They promise he will one day meet them again. Goo Ryeon and Joong-gil live eternity by each other’s side, having let go of their past.

Tomorrow is available to stream on Netflix.