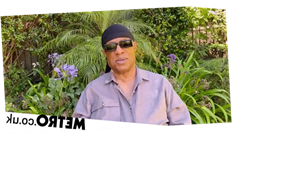 Sir Tom Jones was overcome with emotion when music legend Stevie Wonder made an unexpected appearance on The Voice UK to wish him happy birthday.

On June 7 2020, Sir Tom celebrated a milestone birthday as he turned 80 years old.

During the launch show of The Voice UK’s latest series, the Delilah singer was shown birthday messages by the virtual audience who had tuned in to watch the show over video chat.

But he was left in a state of utter shock when it was revealed that his close friend Stevie had also sent him a special video message.

‘I feel so very happy to congratulate you as you celebrate 80 years on this planet,’ Stevie said as he recorded the clip from a sunny setting.

The Sir Duke singer then broke out into a rendition of one of Sir Tom’s most famous songs It’s Not Unusual, which he accompanied with a harmonica.

‘I had the pleasure of not just meeting the person who sang that song, but meeting a good friend. And I know that that friendship will last for a lifetime,’ he said.

Stevie recalled the ‘many wonderful moments’ he has shared over the years with Sir Tom, including when he appeared on the Welshman’s TV show.

‘I love you with my whole heart,’ he added, in addition to a request that Sir Tom continues to ‘do his best’ in music for another 80 years.

‘Sir Tom Jones, God bless you,’ he said as he concluded his heartfelt message.

Sir Tom’s eyes welled up as Stevie recited his message, leaving him wiping his eyes as he watched the clip alongside his fellow judges.

‘He’s a wonderful person and it was a pleasure to sing with him. I hope I can sing with him again sometime,’ he said.

Sir Tom admitted that the video ‘got me there’, before adding a choked up ‘thank you’.

Several The Voice UK viewers couldn’t handle their emotions as they watched the sweet exchange unfold on their screens.

‘Truly touching, from one legend to another, Stevie Wonder paying tribute to @RealSirTomJones for his 80th birthday. The mutual respect shone through,’ one person said.

‘Not only @RealSirTomJones welling up at that birthday message from @StevieWonder,’ another remarked.

As far as friendships go, these two have definitely hit the jackpot.

The Voice UK returns next Saturday at 8.30pm on ITV.