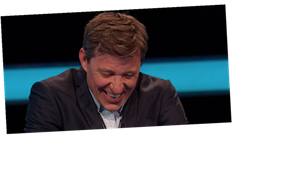 Tipping Point fans were not happy with host Ben Shephard when he returned to our screens on Thursday afternoon to present the latest edition of the ITV quiz show.

The Good Morning Britain star, 45, welcomed four contestants to the famous ITV studio as they battled it out to win the highly sought after cash prizes.

Dave, Emiiy, Greg and Parveen answered a series of questions to win turns on an arcade-style machine.

Dropping tokens down a choice of four chutes, they each hoped to knock piles of the counters off a moving shelve – the more they collected, the greater the prize fund.

Things got off to a tricky start for contestant Emily who made a major mistake during the first round of the competition.

Ben asked the contestants: "Which publishing company was named after a flightless bird?"

Blonde bombshell Emily confidently pressed her buzzer to answer the question and said "ladybird" as her answer.

Ben was left in stitches as Emily shared her wrong answer with the group.

Viewers at home rushed to their keyboard to describe the television awkward moment as Ben couldn't control his laughter.

While a third social media user wrote: "I didn't even take notice of the correct answer of ladybird question? what was it? I was too busy laughing at Ben."

Another added: "You know you've screwed up when even Ben bursts out laughing."

"Ben is laughing at her. Not with her," a fifth viewer said.

The presenter quickly informed Emily that the answer he was looking for was penguin.

He couldn't help but point out that the question asked for a bird and not an insect.

Despite her wrong answer, Emily managed to sail through to the second round.

Dave was the first contestant to be given the boot from the show and he was quickly followed by Greg.

Emily and Parveen went head-to-head in the third round of the show for a spot in the final.

Parveen was the lucky contestant who made it through to the show's final.