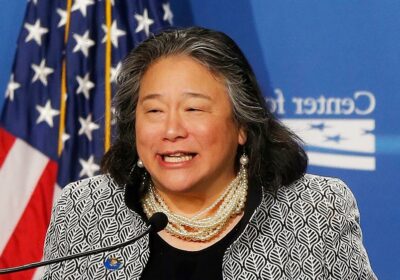 Tina Tchen, the former chief of staff for Michelle Obama who became president and CEO of Time’s Up Now and the Time’s Up Foundation, has stepped down from the pro-women’s group.

Tchen’s resignation comes amid a time of crisis for the organization, which was founded in Jan. 2018 by Hollywood A-listers and Washington power players on the promise of supporting women against sexual harassment.

But in recent months, Time’s Up committed a series of unforced errors, which culminated in a public reckoning about its own purpose. Tchen and other Time’s Up staffers became involved in the handling of the sexual harassment allegations against former New York governor Andrew Cuomo, and after their connections with Cuomo and others in his administration were uncovered, the controversy raised questions about whether a group that’s meant to protect victims had been compromised by its access to power.

And those questions have led Tchen to step down.

In a statement, Tchen said that she has spent her career fighting for positive change for women and “never stopped.” She stated that leading Time’s Up has been a “hugely rewarding experience” and she is proud of the organization for making work better for women across the country.

“Now is the time for “Time’s Up” to evolve and move forward as there is so much more work to do for women. It is clear that I am not the leader who can accomplish that in this moment,” Tchen’s statement said, in part. “I am especially aware that my position at the helm of Time’s Up has become a painful and divisive focal point, where those very women and other activists who should be working together to fight for change are instead battling each other in harmful ways. Therefore, it is time for me to resign and continue to work for change in other ways, and to let Time’s Up engage in the thoughtful and meaningful process I know will occur to move forward.”

Earlier this summer, Time’s Up was implicated in a bombshell report by the New York Attorney General that found that Cuomo had sexually harassed 11 women. The Attorney General’s investigation revealed that the law firm of a Time’s Up founder, Roberta Kaplan, represents Melissa DeRosa, a former Cuomo aide who helped draft a letter smearing the first Cuomo accuser, Lindsey Boylan. The AG found that Kaplan had spoken with DeRosa about a draft letter that would respond to Boylan’s accusations, which she read to Tchen at the time. The investigation described the letter as part of an “unlawful retaliation” against Boylan.

Following the report, Kaplan resigned, amid outcry from sexual assault survivors. Since Kaplan resigned, Tchen has said she does not recall the details of her conversation with Kaplan and was unaware that the letter was meant to be disparaging against any women.

But the New York Times and the Washington Post separately published damning reports about Time’s Up, providing more details of Tchen’s possible involvement in deciding not to publicly support Cuomo’s accuser.

In an attempt to right the ship, Tchen apologized to the Time’s Up board, acknowledged that she had made some missteps, but said she never was in direct communication with the former governor. She told members of the organization that she believes in the Time’s Up mission and solely intends to help women and all survivors and victims of sexual assault.

In a recent internal meeting, Tchen had the support of the board, and a spokesperson for Time’s Up told Variety that she had no plans to resign.

After that meeting, sources told Variety that Time’s Up would be bringing on an outside consulting firm to conduct an internal assessment, and provide guidance for accountability and necessary culture-shift strategies needed for the organization to move forward and help work through its problems. Time’s Up co-founder Nina Shaw stepped in to replace Kaplan as interim board chair, and is said to be taking on more responsibility within the organization, including working directly with the yet-to-be-named consultant on mapping out next steps for the organization.

Quickly following this week’s meeting, more claims about Tchen came out, including the Washington Post report that provided alleged text messages in which Tchen instructed her staff to “stand down” from releasing a press statement in support of Boylan. (In December 2020, when Boylan first accused Cuomo, the then-governor had been heralded as a hero during the pandemic, and became Hollywood darling with frequent TV appearances and even an Emmy award, which has since been rescinded.)

Many survivors had stood behind Tchen, noting her lifetime work of advocacy. But others had been calling for her resignation, stating the she and the organization have lost their way.

Following Attorney General’s investigation of Cuomo, a group of survivors penned an open letter to the Time’s Up Board of Directors, stating that the organization has failed them.

“Time’s Up and Time’s Up Legal Defense Fund were built to advocate for those who make the bold decision to hold our abusers accountable. But it seems that vision was lost and leadership drifted from who mattered most: survivors and victims,” the open letter stated.

In a statement released by Time’s Up immediately after Tchen’s resignation on Thursday, the board pleasantly bids her farewell, while pledging to hold themselves accountable.

“Tina Tchen has dedicated her life to making workplaces fair and equitable for workers and safer for women. That is why we asked her to lead Time’s Up in the first place and why she has accomplished enormous changes in the two years she has served as our president,” the board’s statement says, in part. “Tina has made a difference in the lives of so many and we are grateful for her hard work and impact. Accepting her resignation today is a demonstration of accountability and will allow our organization to move forward.”

As of today, the organization has not announced the hire of an outside consulting firm.

With Tchen’s resignation, the future of Time’s Up, and it’s priorities — survivors versus access to power — is in question.

Tchen was recruited to run Time’s Up in October 2019. She is not the first leader of the organization to face controversy: Lisa Borders, the inaugural CEO of Time’s Up, stepped down in February 2019, after her son was accused of sexual abuse.

Time’s Up was founded in January 2018, after investigations into Harvey Weinstein in the New York Times and the New Yorker caused a sea change in Hollywood around sexual assault and harassment, which extended into exposing predators in a number of industries.