TIFF: Why Netflix’s ‘Dolemite Is My Name’ is Eddie Murphy’s greatest-hits role TORONTO — Early on in the Netflix biopic comedy “Dolemite Is My Name,” Eddie Murphy – as 1970s-era blaxploitation icon Rudy Ray Moore – is tooling around the record store where he works and hits the resident DJ (Snoop Dogg) with some truth: “I can’t lie, man, people love me.”

That could be said for Moore, a struggling comedian and actor who became a rhyming, rapping raconteur and rode his Dolemite character — complete with groovy fashion ensembles and the ever-present pimp cane — to big-screen glory.

TIFF: All the best films we saw at Toronto Film Festival, ranked (including ‘Sound of Metal’)

But it definitely was true of Murphy in his 1980s and ‘90s heyday, coming up on “Saturday Night Live” before rocketing to Hollywood stardom with “Beverly Hills Cop,” and will be with “Dolemite,” which premiered Saturday at the Toronto International Film Festival. Murphy’s first major movie since 2011’s “Tower Heist” — and the most buzzed-about effort this side of his Oscar-nominated turn in 2006’s “Dreamgirls” — is also his ultimate film role, one that encompasses everything Murphy does well. (Apologies to Axel Foley and Donkey, though we still adore them, too.) 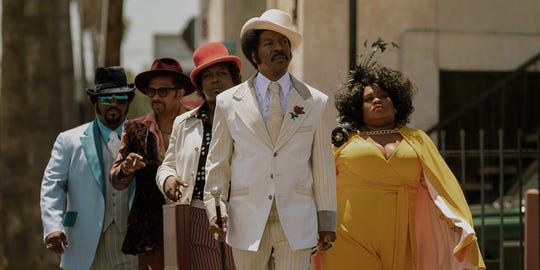 As the lovably profane Rudy in the film (in theaters Oct. 4, streaming on Netflix Oct. 25), Murphy wears that signature toothy grin of his while embracing the absurdities of the Dolemite character. He karate-chops with gusto (if not grace), has a squad of kung fu prostitutes, literally brings the house down with his sex scenes and really shouldn’t be allowed to use a firearm. Dolemite is like six “SNL” personas in one, and they’re all a hoot.

Rudy’s gotten kicked around and told no so many times, though, we root for all the success he has — even the really goofy stuff. Close your eyes, though, and his delivery’s not too far off from Donkey in the “Shrek” movies. Just by the sound of his voice, you can tell he’s having the most fun in the room. And when Murphy launches into one of his rifftastic spoken-word tirades — with machine-gunned four-letter words — it’s hard not to think of Murphy’s brilliant standup in “Raw.”

There is a serious side to Rudy’s story, too: the yearning to finally be famous for something, to have the chance to do something. He doesn’t look like a superstar either, obviously aging and carrying a paunch. Among his band of filmmaking misfits, Rudy confides most in Lady Reed (Da’Vine Joy Randolph) about his insecurities and the movie — which always seems to be about five minutes from falling apart — and pulls from that “Dreamgirls” dramatic streak to create a complex man in the middle of all the craziness.

And does it need mentioning that Murphy’s still insanely, gloriously funny? “Bowfinger” has always been his high point in being all-around hilarious, with “Coming to America” a close second, and “Dolemite” fights right in with his best work as a multidimensional comedian. 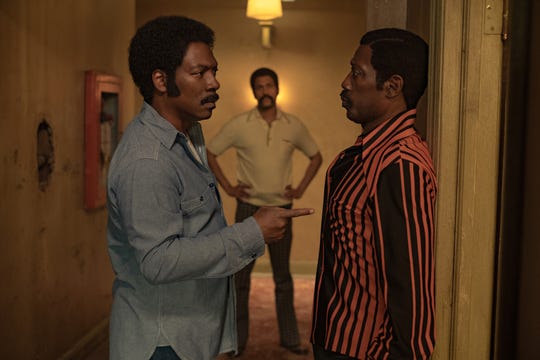 Murphy’s been missed in recent years, although he’s about to come back into the spotlight in a big way: In addition to “Dolemite,” he’s hosting “SNL” on Dec. 21 for the first time in more than 30 years, starring in the upcoming “Coming to America,” and pondering a standup tour next year.

Whether he’s got another Oscar nomination — or even a win — coming is tougher to say, with a bunch of strong candidates vying for best actor this awards season. He doesn’t need it, though — like Dolemite, he seems fine being among the people, doing what he does best, saying whatever he wants to say. And in that sense, Murphy’s as good as gold.