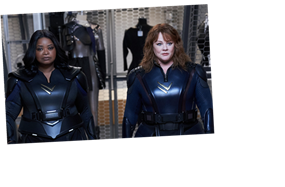 Netflix has released the first official trailer for “Thunder Force,” a new superhero comedy starring the dynamic duo of Melissa McCarthy and Octavia Spencer. The project is the latest collaboration between McCarthy and her writer-director Ben Falcone, who previously worked together on “Tammy,” “The Boss,” “Life of the Party,” and last year’s critically panned HBO Max comedy “Superintelligence.” Here’s hoping Spencer’s fresh energy can reignite Falcone and McCarthy’s old creative spark, or at least offer something new to the mix of their predictable schtick.

Here’s what we know so far about the plot via Netflix’s official synopsis: “In a world terrorized by super-villains, one woman has developed the process to give superpowers to regular people. But when scientist Emily Stanton accidentally imbues her estranged best-friend with incredible abilities, the two women must become the first superhero team. Now, it is up to Thunder Force to battle the super-powered Miscreants and save Chicago from the clutches of The King.”

“Thunder Force” is the latest Netflix tentpole hopeful to capitalize on the popularity of superhero movies. The streaming giant had a successful first outing into the genre last summer with the Charlize Theron vehicle “The Old Guard,” followed closely by the Jamie Foxx starrer “Project Power.”

Academy Award winner Spencer was most recently seen in “Self Made: Inspired by the Life of Madam C. J. Walker,” a miniseries which she co-executive produced for Netflix. She is next slated to appear opposite Riz Ahmed in the sci-fi thriller “Invasion,” from “Beast” director Michael Pearce. She is also attached to the upcoming comedy from Nat Faxon and Jim Rash (“The Way Way Back,” “The Descendants”).

Check out the first official trailer for “Thunder Force” below.