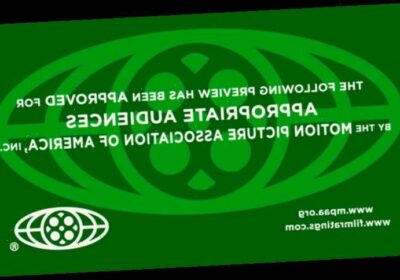 Trailers are an under-appreciated art form insofar that many times they’re seen as vehicles for showing footage, explaining films away, or showing their hand about what moviegoers can expect. Foreign, domestic, independent, big budget: What better way to hone your skills as a thoughtful moviegoer than by deconstructing these little pieces of advertising?

This week, we put on an angry pair of jeans, learn how to be a private dancer from the OG, spend some time with one of America’s most high profile Armenians, see some sci-fi done on the cheap, and get our hands filthy with dirty money.

When I read our review of this film, the latest from director Elza Kephart, I knew it was for me.

A possessed pair of jeans is brought to life to punish the unscrupulous practices of a trendy clothing company. Shipped to the company’s flagship store, Slaxx proceeds to wreak carnage on staff locked in overnight to set up the new collection. Starring Romane Denis (Slut in a Good Way), Brett Donahue (Private Eyes), Sehar Bhojani (The Handmaid’s Tale) and Stephen Bogaert (The Umbrella Academy). Directed by Elza Kephart (Go in the Wilderness).

This trailer kicks things off by saying it’s from the producers of Turbo Kid. After seeing the trailer, it feels like it was inspired more by Quentin Dupieux than Turbo Kid. Either way, the movie looks like it’s a fun ride. With so many films that deal with heady, serious issues, a flick about a pair of killer pants is just what many of us need at the moment.

Millions fill stadiums across the world for the sound of Serj Tankian, the Grammy-winning lead singer of System Of A Down. With exclusive interviews, adventures, and original footage personally filmed by Serj, TRUTH TO POWER allows audiences backstage access to an international rock star whose faith in music not only revolutionized heavy metal, but also world events. Throughout his life, the musician has pursued social justice, harnessing the power of his songs and celebrity for real political change. Serj’s voice is equally likely to take on American corporate greed as lambast the corrupt regime of his homeland. His decades-long campaign for formal U.S. recognition of the Armenian Genocide was finally approved by Congress last year. Governments hate him. People love him.

Hovannisian’s last outing, I Am Not Alone, was critically lauded for its focus on how one person can make a difference in their community and their country. It looks like he’s doing much of the same with Serj Tankian. Superficially, the trailer hints that it’s going to examine the crossroads of artistry and advocacy, and show how some choose to use their higher profile to help those who can’t help themselves. The Armenian Genocide is something that doesn’t get discussed enough in popular discourse, and to have someone like Serj discussing this, and other politically charged topics, makes the documentary feel less like a puff piece and more like a hard-hitting expose.

Having Joe Berlinger as an executive producer doesn’t hurt either. Berlinger has an Oscar nom to his resume for this work on Paradise Lost 3, to say nothing of his directorial expertise for gems like 2004’s Metallica: Some Kind of Monster.

Back in 2010, the film Easy Money, aka Snabba Cash, was a success. Fast forward 11 years and now it’s time for a television series.

How far would you go for the life you want to live?

When tech entrepreneur Leya kick starts her company with criminal money, she finds out the hard way there are no shortcuts to the top without paying the price.

It makes sense that they’re updating the source material a bit, bringing things into the 2020s. Usually, when things like this are remade for the benefit of the small screen, your mileage will vary on whether there’s enough gas to propel it forward. Still, the trailer here makes a wonderful case as to why this deserves your attention. It’s slick, it looks pretty, and there’s intrigue and violence. Lots and lots of violence. I can’t put my finger on exactly what appeals to me so much about something that looks like a fun diversion, but it looks fun and wears its previous incarnation’s pedigree on its sleeve.

Directors Dan Lindsay and T.J Martin know how to make a documentary, as their Oscar win for 2011’s Undefeated was well-earned.

A Sky Original that follows the life, career and legacy of ‘The Queen of Rock ‘n’ Roll’ Tina Turner.

We take a look at the life and career of a global superstar and an intimate portrait of a woman who overcame extreme adversity to define her career, her identity and her legacy on her own terms.

Charting her impressive rise to early fame, her personal and professional struggles throughout her life and her against all odds revival as a global phenomenon in the 1980s.

Tina Turner is music royalty. The Queen of Rock n’ Roll, she ushered in an age of musical supremacy. For decades, she ruled the airwaves. Through radio, television, movies (1985’s Mad Max Beyond Thunderdome is a solid entry), music videos, she was prolific. She only released 10 albums, but that’s more than enough to capture the energy and charisma of a true chanteuse like her. The trailer succinctly, if not coyly, tees up her story and the musical impact she had on the world. Of course, if we’re only getting her side of the story, it may end up being nothing more than a slow clap for a woman who deserves it. But, with Lindsay and Martin being such sharp directors, here’s to hoping it’s a winner of a story.

I’m not sure I’ve ever seen a movie directed by three people, but here’s to hoping that Saman Kesh, Jeff Desom, and Dugan O’Neal make it work.

Without explanation or warning, a number of mysterious, alien “doors” suddenly appear in every corner of the globe. While many of those that encounter these sentient visitors feel the strange urge to interact with them – never to be seen again – others stay behind to face the potential threat of what their ultimate agenda towards mankind is. In a rush to determine the reason for the arrival of these cosmic anomalies, the government enlists volunteers to enter the doors so that we might learn more about their origin or purpose. But even these brave people are not prepared for what lies beyond the threshold. Told through multiple perspectives: a ragtag band of high school students discover a door for the first time, volunteers explore the parallel reality beyond the threshold, a lonesome hermit manages the seemingly impossible: establishing communication with a door.

The effects look a little lo-fi, the story seems slightly odd, and the trailer doesn’t really give us a lot, but, this still looks amazing. Everyone involved looks like they’re swinging for something bigger than being this little sci-fi that could. Instead, it’s attempting to be great. Even after reading the film’s description, I’m not sure I get what’s happening, but the totality of what we’re given is as enticing as anything put out by a major studio. Let’s get weird.

Nota bene: If you have any suggestions of trailers for possible inclusion in this column, even have a trailer of your own to pitch, please let me know by sending me a note at [email protected] or look me up via Twitter at @Stipp

In case you missed them, here are the other trailers we covered at /Film this week: