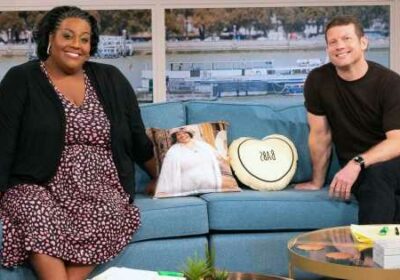 This Morning presenting duo Alison Hammond and Dermot O’Leary have become the hottest hosting pair in town since taking over the gig from Ruth Langsford and Eamonn Holmes last year.

Over the last six months they’ve made their mark with the show’s audience, with one survey revealing they increase viewers’ happiness by 250%. That’s even more than fellow presenters Holly Willoughby and Phillip Schofield.

To mark the milestone, Alison and Dermot were asked a few questions about their time together so far and the pair revealed that they have some “wild nights out” in Alison’s hometown of Birmingham planned for the future.

When asked why he thinks they were paired together, Dermot said: “It’s lovely to be paired with someone that I don’t know intrinsically but I’m getting to know more as we go along.”

He continued: “Will there be wild nights out in future? Yes! She’s promised to take me to Birmingham.”

And it seems the positivity is reciprocated. When reminiscing on their first few months working together, Alison confirmed that “it’s been an absolute dream.”

She continued: “I’ve loved every minute of it to be honest!”

Alison and Dermot both said that getting to know one another more has been the best part of working together.

“That might sound silly because people assume that when two people get a job together that they know each other really really well, and we didn’t,” Dermot explained.

Alison added: “We had obviously met before and had seen each other over the past twenty years, but we didn’t really know each other. He always shows me pictures and videos of his baby and his cats, so I’m finding out so much more about him and his wonderful family. He’s just a really cool person.”

Alison also commented on the pair’s relationship, likening it to “a great brother-sister relationship," and went on to explain how she’d always “admired” Dermot.

Dermot added that Alison is “brilliant at her job" and proceeded to compare her to fellow Big Brother star turned TV presenting legend, Rylan Clark-Neale.

“There’s a world of difference from just being yourself in a reality show and being able to host a show, and there aren't that many people that can do that. Alison’s one, Rylan’s one. It definitely takes a certain skill set and Rylan has that and Alison definitely has that.”

The good news is, as half term approaches, viewers can expect to see a lot more of the popular duo on This Morning. Alison and Dermot will host the whole of half term week, from Monday 31 May to Friday 4 June, before returning to presenting every Friday.

This Morning airs weekdays from 10am onITV and on ITV Hub