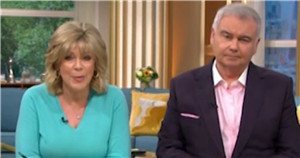 This Morning fans were left divided when a fish and chip shop revealed they were being boycotted for being named after the famous serial killer, Jack The Ripper.

During a controversial food segment on Tuesday morning, presenters Eamonn Holmes and Ruth Langsford spoke to the owner of a fish and chip shop called Jack The Chipper.

The fish and chip shop in question, which is based in Greenwich, south east London, is named after infamous London serial killer, Jack The Ripper.

The historic murderer is believed to have killed up to five victims, all of which were women and in gruesome fashion, in Whitechapel area of London back in the 1800s.

The shop's tongue-in-cheek name is a rather risky food pun according to some – deciding to replace the name 'Ripper' with 'Chipper'.

When asked how bad the backlash has been, Cagri Turhan, the manager of the store, admitted that it has been "quite bad" and mostly "online".

He said: "It's quite bad at the moment. More online than anything else. The customers that we have inside the shop, when they come they love the food, they say 'your food is great', 'your customer service is great'.

"However, these specific people that are trying to boycott the shop itself always try to give us negative feedback online, negative reviews, and they try to damage the reputation of the business."

However, ITV viewers at home were fuming at the segment on social media, with fans on Twitter arguing over the fish and chip shop's unique name and whether or not people should be boycotting the business.

One fan wrote: "Offended by the name of a fish and chip shop? get a f***ing life."

A second agreed, writing: "i am in love with #jackthechipper fish and chip shop and their owners. Brilliant name. I am going to plan a visit. People need to get a life!"

A third penned: "What is up with people.. it's a fish and chip shop with a play on words.. there's loads of chip shops about with names playing on words… seem decent blokes!"

However, some fans bitterly disagreed and were far from happy with the business.

One fan said: "I'm no snowflake but this is making me cringe a bit. Stupid name."