Home » TV & Movies » This Is Us Sneak Peek: Kevin Lands a Major Movie Role — So Why Does Madison Look So Upset?

This Is Us Sneak Peek: Kevin Lands a Major Movie Role — So Why Does Madison Look So Upset? Tonight’s This Is Us features balloons, pancakes and a big career move… but in the exclusive clip above, the mood in Madison’s kitchen is far from festive.

The episode (NBC, 9/8c), titled “Changes,” finds parents-to-be Kevin (Justin Hartley) and Madison (Caitlin Thompson) discussing their non-traditional engagement, which Miguel and Rebecca have chosen to commemorate in a very traditional way. It also finds Kevin shirtless and sweaty, having just wrapped up one of his two-plus (!) workouts of the day.

So when Madison puts a plate of pancakes in front of her fiancé, she assures him that their breakfast is “gluten-free and low-cal” (aka the two most womp-womp qualifiers you could ever apply to a big, fluffy stack of hotcakes). But before Kev can even take a bite, he glances at his phone and everything changes. 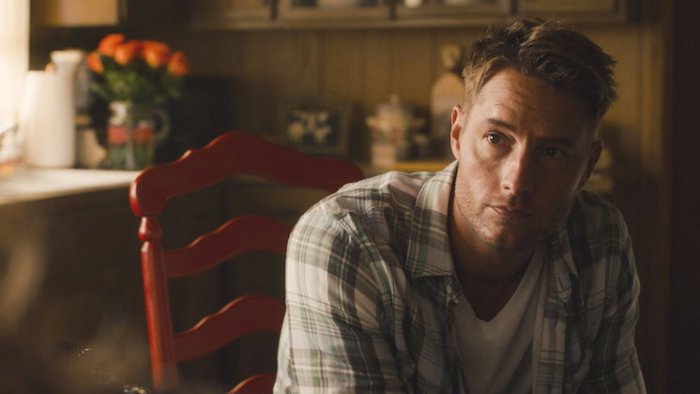 “I think I just got the part,” he says. “I mean, pending a good meeting with the director, I got the part.”

“The legal movie? The lawyer with the glass eye?,” Madison asks, prompting Kevin to correct her that the movie’s title is The Glass Eye but his characters’ peepers are plain old eyes.

Anyway, the news definitely changes the temperature of the conversation between the parents-to-be, particularly after Kevin mentions his upcoming sex scenes and how he’s going to have to prepare for them. (Watch the clip above to see what we mean.)

Elsewhere in the episode, per the official synopsis, “Kate and Toby take a big step in their adoption journey” and, in the flashback portion of the hour, “Jack and Rebecca brace for puberty.”

Press PLAY on the video above, then hit the comments with your thoughts: Even at this early stage, are we thinking that Madison and Kevin have what it takes to stay together?